Rock stars of the environment and conservation sectors recently came together from across Australia to present at the inaugural WA Feral Cat Symposium held in Mandurah on 31 May.

The Symposium was a huge success with nearly 200 people coming together to tackle the complex issue of protecting WA’s native animals, through effective, humane feral cat control.

Land clearing and feral cats remain the highest threats to our biodiversity and, while there are some fabulous success stories of isolated feral cat control, a landscape scale solution is yet to be realised. It is estimated there are between 1.4 to 5.6 million feral cats across Australia, killing more than 1 million birds, 1 million reptiles and 1 million mammals every single day.

Representatives of government, NGOs, research, industry and the RSPCA presented across 3 themes, being WA governance frameworks to support feral cat control, future techniques being explored, and a range of successful management actions.  Importantly, the humane side of biodiversity loss, the need to humanely control feral cats, was also discussed.  Panel sessions provided Symposium delegates the opportunity question the presenters and further elaborate on important issues.

The Symposium was focussed solely on the impacts on biodiversity from feral cats, and while the impacts of domestic and stray cats was not dismissed, it was made clear throughout the day that the topic was centred on the impacts and control mechanisms for feral cats only.

National Threatened Species Commissioner Sally Box, who travelled from Canberra for the Symposium, highlighted the scale of the problem from a national perspective.

A real privilege to speak at the Western Australian Feral Cat Symposium yesterday on the national approach to tackling the threat of #FeralCats. The Symposium brought together Government, scientists, practitioners and community. Read more here: https://t.co/xXNfgFBSVm pic.twitter.com/vy4x8jADOs

“Feral cats are a massive threat to Australia’s amazing mammals and birds,” she said. “This WA Feral Cat Symposium has been such a great opportunity to share success stories, contemplate the challenges we face, and put our heads together to find enduring solutions.”

“Bringing people together from across Australia to inform how WA can better protect its native animals is a great initiative and a concept we hope to keep going”, said Peel-Harvey Catchments Council Acting Chairman Marilyn Gray.

John Woinarski, of Charles Darwin University and the Threatened Species Recovery Hub of the National Environmental Science Program, reinforced the alarming impacts of feral cats on our native animals.

“Feral cats subvert Australian ecology, as they are a primary cause of the loss of much of our precious biodiversity. For our country, and for the natural heritage we want to pass on to our descendants, we need more effective policy, law, management and community involvement in the control of this threat,” he said.

Other speakers included Scott Thompson who talked about the success of using conservation detection dogs to help control feral cats.  Owain Edwards of CSIRO spoke on research for genetic biocontrol, a complex and emotive subject.  The science is advancing and there are some exciting developments that will continue to require a lot more research and robust dialogue as it progresses.

Rachel Paltridge and Christine Ellis travelled from Alice Springs to talk about the benefits the Nyirripi Indigenous Ranger Program is having in restoring biodiversity by integrating traditional knowledge and tracking skills with scientific research and new technologies for wildlife management – “two-way science.”

Up now our CEO @RichardMcLellan on the closing panel at #WAFeralCat18 – happy to pass on Twitter questions pic.twitter.com/OWK7QD0gOr

Australian Wildlife Conservancy CEO Atticus Fleming, who is adamant about the importance of controlling feral cats for the protection of native animals, said “This has to be the highest priority for conservation, as nothing causes more damage to native fauna than feral cats”.

Peel-Harvey Catchment Council Chairman Marilyn Gray said “We are so pleased to have been able to put together this Symposium. Bringing people together for a healthy environment is what we do.  It was a huge success and there was definitely an air of optimism in the audience. This is a complex issue, but we have to stop the extinction of our native animals. By coming together to tackle this, with support from government, sound science, exciting new technologies, and a collaboration across industry, I think for the first time in quite a while, we feel hopeful about the future for our native animals.”

“We are grateful for the generous efforts of everyone who gave their time to share their knowledge and information. This is such a complex issue and there are such a diverse range of management options. We need to share information, so that with good information, we can inform good decision-making, and take robust actions.”

On the day after the Symposium a smaller group of key stakeholders gathered to discuss the way forward.  It was unanimously agreed that the establishment of a WA Feral Cat Taskforce be explored so that representatives of all relevant sectors can continue to support each other by sharing information, resources, and actions to remove the barriers to effective coordinated landscape-scale control of feral cats across WA. At this stage a small number of nominated representatives will take-up the lead to work through identified priority actions and to ensure that the momentum from the Symposium continues into practical solutions to conserve our biodiversity, and protect our native fauna from feral cats. 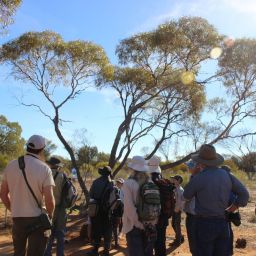 Safe haven in the bush