Winter finally arrived in PJ … on Show Day of all days

The eastern part of our region has surely been in need of some rain lately, but really, did it all have to arrive on possibly Perenjori’s busiest day of the year – the day of the Perenjori Agricultural Show? Because, with “Murphy’s Law” ringing in our ears (or was that the rain drumming on the roof of our not-quite-weather-proof tent), that’s what happened last Saturday.

NACC was at the show, sharing a display space with two of our partner organisations, the Yarra Yarra Catchment Management Group (YYCMG) and the Gunduwa Regional Conservation Association. NACC CEO Richard McLellan said he had a great day with close colleagues Lizzie King and Jude Sutherland, and caught-up with many familiar members of the “PJ” community.

“No-one was complaining about the rain,” said Richard. “So although the number of visitors that we had in our tent may have been lower than we might have liked, the mood among those who did drop-in was one of enthusiasm and positivism,” he said. “We had a great time.”

“I had a number of good conversations with farmers from the region – about the year we’re having, but more specifically what they’re doing on their farms in this dry year, how they’re adapting to the changing climatic conditions, or what landcare and NRM works they’re undertaking. A couple said they were using the time to fence-off bush, for example.

“Climatic variability and rainfall unpredictability, and the pattern of increasing summer rainfall and decreasing winter rainfall, was certainly a topic of interest.”

Also in the same display area were displays and staff from the WA Parks and Wildlife Service, Bush Heritage Australia, and the Mayfield Ecology Lab from the University of Queensland.

A camera-trap video of a Malleefowl nest near Morawa was one of the highlights of the YYCMG display, with footage of Malleefowl (Leipoa ocellata), plus Kangaroos and Euros, and more disturbingly, feral cats, all captured “on film”.

NACC tries to get along to a number of agricultural shows in the region each year, with shows at Perenjori, Mingenew, Dalwallinu and Northampton on the schedule this year. Please drop-in for a chat if you’re around. 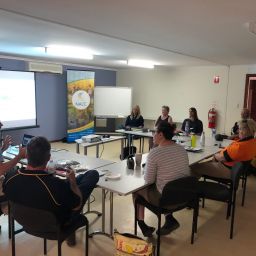 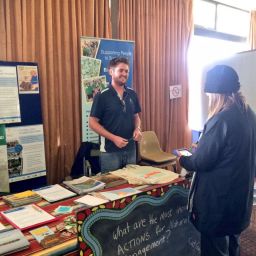