Watheroo Wattle, or Acacia aristulata, is a white shrub, with waxy, hairy branches.

Typically, the Wattle flowers between September and December, with creamy white coloured flowers and arranged in globular heads.

The Wattle’s leaves are phyllodinous with a single central nerve and an off-centre pointed tip. 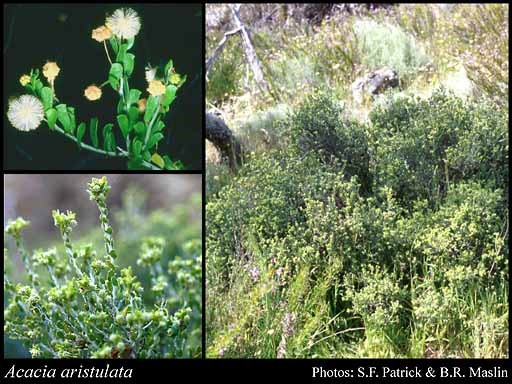 The phyllodes are oblong to wedge-shaped, 7–10 mm long by 2–3.5 mm wide and below each phyllode are two light brown and dry-textured stipules, 2–3 mm long.

Pods are coiled or twisted, up to 6 cm long by 4–5 mm wide. Seeds are about 4 mm long, shiny grey with a black centre and pale yellow seed stalk.

The shrub can grow up to 1m high, which is erect, scrambling or diffusely spreading or domed in more exposed disturbed locations.

Surveys for Watheroo Wattle have recorded approximately 130 individuals in these two areas.

The main identified threats to Watheroo Wattle are the small number of individual plants currently known, and the limited geographic range of the species (leaving these populations susceptible to extinction through stochastic events).

The species is found on brown loamy sand or clay in rocky low chert or granite hills. Associated species include Allocasuarina huegeliana and Banksia sessilis, in Allocasuarina woodland.

The distribution of this species is not known to overlap with any EPBC Act-listed threatened ecological communities.

For more information about this plant, or if you have seen it, please contact the Department of Parks and Wildlife’s Geraldton District Office on 9964 0901.