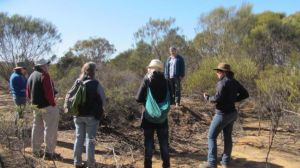 Malleefowl (Leipoa ocellata) enthusiasts from across Western Australia gathered in Dalwallinu on the 2nd and 3rd of August to learn important national best practise monitoring skills from Australian Malleefowl experts.

The workshop was a huge success and the first of its kind put on by the North Central Malleefowl Preservation Group (NCMPG). The NCMPG have been operating and protecting Malleefowl in the Northern Agricultural Region for 20 years.

President of the NCMPG and local famer, Gordon McNeil, said, “We had such a good time that it made the time we put in preparing seem very worthwhile. We would all like to keep the momentum going.”

(To the volunteer participants) “We feel energised by your friendship and your participation at the weekend. Thanks again for making the effort to join us as we seek to preserve Malleefowl in their habitat in this region,” said Mr McNeill. Speaker Tim Burnard, National Malleefowl Coordinator from Victoria spoke about the ‘National Recovery Plan’ and Carl Danzi, formerly the Malleefowl co- ordinator for WA at WWF provided training on using a smart phone application to monitor the Malleefowl nests (known as mounds). This is the first time smart phones have been used for monitoring in Malleefowl WA.

The second day of the workshop featured a site visit to a bush reserve on Garry Cail’s property at Jibberding where participants were able to practise monitoring Malleefowl mounds. 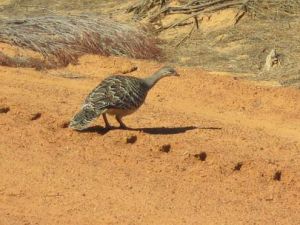 Heather Legge, Natural Resource Management Officer for the Northern Agricultural Catchments Council said “The weekend was a unique opportunity for like-minded folk to get to together and gain knowledge from Malleefowl experts. Malleefowl are loveable iconic birds and this fun and well delivered training has energised volunteers to keep up their important work in preserving them.”

The workshop wouldn’t have been possible without funding from a grant provided by Gunduwa Regional Conservation Association. Appreciation also goes to the Wubin Progress Association who provided the venue for lunch and the AGM of NCMPG at ‘The Shed,’ Wubin.