Malleefowl monitoring has kicked off with a bang in Badimia Country in the mid-west of WA – with more than 321 mounds being monitored by a handful of dedicated volunteers during a week long period.

The volunteers were well catered for at the mine site with communal meals being a great time to plan the days’ work ahead, share stories about the bush walking (or for some bush bashing) and join the mine staff for a friendly game of table tennis.

Over at Charles Darwin Reserve – managed by Bush Heritage Australia – the volunteers all got to kick back and enjoy the many fabulous sunrises over Mt Singleton. They also got to enjoy not only the company of station dog Charlie, but also the chance to join Reserve Manager William Hansen and his young family to watch the AFL Grand Final.

The monitoring was rounded off with a special visit to Ninghan IPA and the rare chance to visit Wardagger Rock with local Badimia men Ashley and Drew Bell and learn more about the unique connection the local Traditional Owners the Badimia people have with the land.

Volunteer and budding ecologist Nik Gladigau attended the monitoring and was greatly impressed with the technology developed by the NRMT.

“This was my first year monitoring Malleefowl and I enjoyed the time spent on country searching for this threatened bird and recording active mounds.”

“Technology like Cyber Tracker can make citizen science activities like this accessible to people of all ages and abilities.”

“And from my experience studying environmental science at Murdoch University, I can also see how it will make management of large amounts of data more streamlined.” 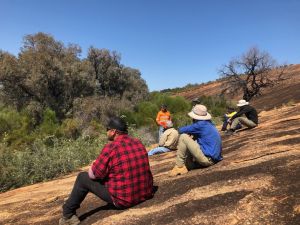 Dr Stingemore added “Aboriginal peoples have a special connection and relationship with Australia’s natural environments. And the role they play in caring for their country is a vital component in conserving Australia’s biodiversity.”