This year’s Mingenew Irwin Group (MIG) Spring Field Day began early with two pre-field day walks – one at Arena (Heitman’s farm) with the topic of discussion being using Wi-Fi in dryland farming, and the other at Piccadilly (Dempster’s farm) looking at a deep-ripping comparison trial.

Steve Davies from the Department of Primary Industries and Regional Development (DPIRD – formerly DAFWA) was on-hand to show the difference between a number of deep-ripping options, using soil pits kindly dug by the Shire of Mingenew. This display was aimed at combatting soil compaction and non-wetting soils.  Compaction starts to affect root growth at around 2MPa and each ripping option showed varying results with compaction starting at 20cm down to 60cm. Some of the roots showed signs of toxicity as well as compaction.

After this display, it was onto the main MIG Spring Field Day trial site, which was also on the Dempster’s property south of Mingenew – in sand plain country.  In all, there were 12 different field trials at the site, encompassing such subject areas as harvest weed seed management, NVTs, pre-emergent herbicide treatments, and fence-line weed management.

One bit of news that attracted considerable interest on the day, especially among the lupin growers and breeders present, was the release of a new narrow-leaf lupin variety called ‘PBA Leeman’.  It has a high protein content (0.6% higher than Coromup), is very tolerant to Metribuzin, flowers early, and has yields similar to or greater than Coromup in WA.

The day finished-off with a great presentation from James Dempster regarding his 2016 Nuffield Scholarship.  He spoke passionately about his research topic ‘How to grow the family farm’, and the value of the Nuffield scholarship program.

The 2017 MIG Spring Field Day was the first field day for Kathryn Fleay in her new role as MIG CEO – although she is definitely no stranger to the group, having previously been the Group’s trials coordinator. 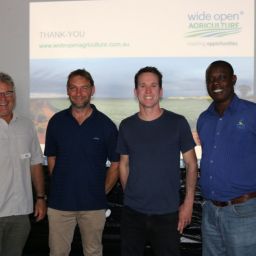