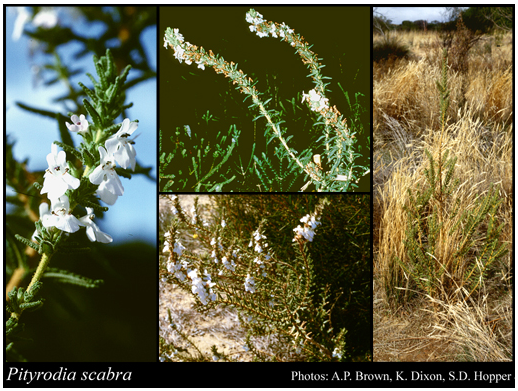 Wyalkatchem Foxglove is a shrub that grows to 1m tall and is covered with sticky, branched hairs. Its linear leaves are 5 to 12mm long and appear in whorls of three. They lack stalks and are blunt at the apex, with in-rolled margins. The margins have numerous small, rounded teeth, and are covered with dense, coarse, short hairs, becoming rough above. Its flowers are white, with two upper lobes and three lower lobes.

Very little is known about the biology and ecology of Pityrodia scabra, however the appearance of seedlings following road and rail works indicates that the germination of seed is likely to be stimulated by disturbances such as fire and roadside grading. In addition, population monitoring reveals that the number of mature plants decline with time after disturbance.

The Wyalkatchem Foxglove is known from the Cowcowing area in the central Wheatbelt, although the species, or species habitat, may occur in a small area near Buntine in the Northern Agricultural Region. A total of 11 plants were known to exist along a roadside in 1987. Over the next nine years many died due to varied circumstances – such as herbicide spraying, excavation stress, and vehicle movement. Given the precarious status of this species in the wild and its short life cycle, it was considered a suitable candidate for interventionist management action. Cutting material and seed – collected in 1990 – were propagated at the Botanic Gardens and Parks Authority (BGPA) at Kings Park in Perth. The cutting material was grafted onto root stock and, when flowering, was cross-pollinated by hand to produce viable seed. The 119 plants produced for translocation were a mix of seedlings and cuttings, of which the seedlings turned-out to be more successful after translocation.

Information Source: Government of Australia, Department of Environment and Energy; and WA Department of Biodiversity, Conservation and Attractions (including Florabase).