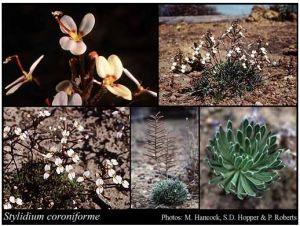 The name Stylidium coroniforme is in reference to the plant’s attractive crown-like arrangement of inflorescences, encircling each cluster of rosettes. The Wongan Triggerplant is a small, perennial, closely-branching plant, with several rosettes of greyish-green leaves. A flowering stem, 10 to 15cm tall, arises from each rosette. Each stem holds a number of short-stalked flowers in a pyramidal raceme up to 12cm long. The corolla is creamy pink with red spots at the throat and dark red lines on the outer surface of the petals.

The Wongan Triggerplant’s colourful petals reportedly attract a range of native bees, and bombyllid and syrphid flies. The plant also has nectar guides present, and large amounts of nectar flow at the throat of the flower.

The Wongan Triggerplant is currently known from two areas: Wongan Hills; and Maya (about 140km to the north of Wongan Hills). Recent genetic analysis suggests that plants in the two areas represent different taxa, and it is likely that the taxon represented in the Maya populations will be described as distinct. If this happens, the Maya taxon will be proposed as Declared Rare Flora in its own right, and the ranking of Stylidium coroniforme will need to be reviewed.

There are 10 populations of the Wongan Triggerplant currently known. The two populations near Maya occur on road and rail reserves. Of the six populations known from the Wongan Hills area, four occur on a Water Reserve, two on private property, one on a Nature Reserve, and one on an Experimental Farm Reserve.

The Wongan Triggerplant grows on shallow yellow sand over laterite, on open areas in low scrub and heath, and the seed germinates after habitat disturbance. Young plants have been recorded following fire, roadworks and gravel extraction, and the slashing of associated vegetation during power line maintenance. Following germination, plants mature and set seed quickly, with individual plants living between 5 and 15 years. Seed then persists in the soil for a number of years awaiting another disturbance event.

Staff from the WA Botanical Garden and Parks Authority (BGPA) have successfully propagated this species using division and cuttings. The species has also been successfully cultured from leaf tissue, resulting in minimal disturbance to wild plants.

The main threats to the Wongan Triggerplant are poor recruitment, lack of and degraded habitat, accidental destruction, and fire.