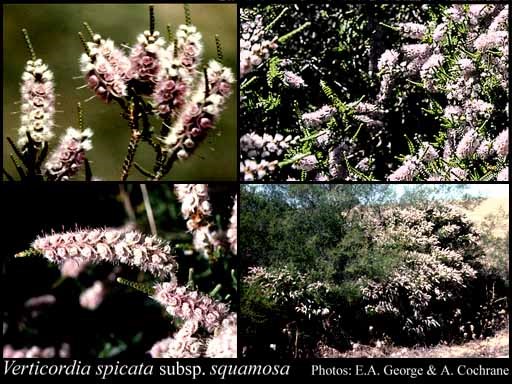 Verticordia spicata subsp. squamosa is more commonly known as the Scaly-leaved Featherflower. It is listed as Endangered under the Commonwealth Environment Protection and Biodiversity Conservation Act 1999 (EPBC) and as Declared Rare Flora under the Wildlife Conservation Act 1950.

It was first found east of Three Springs in 1974, and since then only 9 mostly small populations have been found within the Shires of Three Springs, Morawa, and Mingenew. Much of the habitat for this species has been historically cleared, and it now grows mainly along roadsides. There are now fewer than 40 identified plants in the wild, with some of these plants being from established translocations.

The Scaly-leaved Featherflower grows in mallee scrublands on yellow sand, yellow-brown sand or yellow clayey sand, and is found in sandplains, flats and road verges. It is a shrub which grows up to 1.5 metres high and 1 metre across. It produces masses of pinkish-white feathery flowers at the ends of its branches during late spring and early summer (October to December).

The key threats to the species include habitat loss, invasive weeds, rabbits and inappropriate fire regimes.

The scaly-leaved Featherflower is one of 30 plants that the Australian Government has prioritised resource allocation to, to support the species recovery effort. Australia’s Threatened Species Strategy includes targets to:

Priority actions that may support the species include:

we had some Vert Spicata at our farm in Ajana at last count a year or two ago. We collected Spicata on yellow sand for herbarium. I will check in spring for flowering plants. I also grew one plant from seed and it was outstanding for about three years, then died.