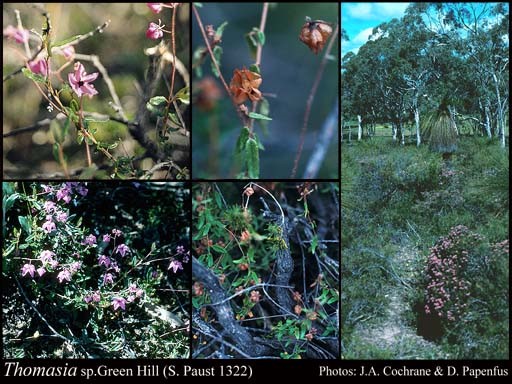 Thomasia sp. Green Hill is more commonly referred to as the Green Hill Thomasia. It is listed as Endangered under the Commonwealth Environment Protection and Biodiversity Conservation Act 1999 (EPBC) and Declared Rare Flora under the Wildlife Conservation Act 1950. It also currently meets the World Conservation Union (IUCN 2000) Red List category Critically Endangered, as it is only known from one population, with declining habitat quality.

The Green Hill Thomasia is a multi-stemmed shrub that grows to approximately 40cm high and is covered in blue-purple flowers in October.

Thomasia sp. Green Hill was first officially collected in 1972, several kilometres south of New Norcia. This population could not be relocated during flora surveys in 1993 and 1994. In September 1995 a survey was conducted specifically for Thomasia sp. Green Hill in the New Norcia area, and a collection was made in an area of remnant vegetation on private property. This consisted of two small subpopulations (13 and 8 plants respectively), separated by a distance of 1.5 km. This remains the only known population but has increased in size to 18 and 81 plants respectively.

The main threats to its survival are weed invasion, inappropriate fire regimes, grazing by kangaroos, destruction resulting from firebreak maintenance and farming activities, and a lack of genetic diversity. There is an Interim Recovery Plan (IRP) in place for the Green Hill Thomasia. IRPs outline the recovery actions that are required to urgently address threatening processes most affecting the ongoing survival of threatened taxa or ecological communities, and begin the recovery process.