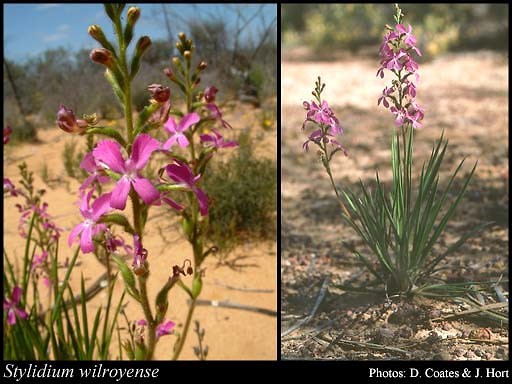 Stylidium wilroyense is listed as Declared Rare Flora under the Wildlife Conservation Act 1950, with a conservation status of Priority 2.

Good news for critically endangered Stylidium wilroyense triggerplants, with over 60 discovered at Wilroy Nature Reserve last month. There are less than 200 of these beautiful pink flowering triggerplants occurring in three locations in the Geraldton District- so this latest find is very exciting! Conservation officers believe the new growth is a result of a prescribed burn in May 2015 designed to stimulate recruitment of the species.

Stylidium wilroyense is a tufted perennial herb 0.3-0.6 m tall. There is a basal rosette of erect or recurved lanceolate leaves, with scale leaves within and the leaf bases surrounded by dense woolly hairs. The leaves are 12-15 cm long, 5-6 mm wide, the side towards the axis is densely scabrid. The flowers are arranged in a tall raceme on a scape 42-47 cm long, with dense glandular hairs. The peduncles are one-flowered, the lower ones 15-20 mm long, the upper ones 4-6 mm long. The flowers have four dark pink vertically paired lobes, to 15 mm long. The labellum is ovate, dark pink, c. 3 mm long, papillose with two basal appendages. There are four pink throat appendages c. 1.5 mm long, the upper two wing-like, the lower two narrowly ovate and forked. The fruit is an ellipsoid capsule 7-8 mm long.

This species is related to Stylidium caricifolium but differs in its racemose inflorescence, scape 42-47 cm long, peduncles one-flowered and dense woolly covering amongst the leaf bases.

Distribution and Habitat in the Geraldton District

This taxon is known from two small populations south-west of Coolcalaya and two in the Mullewa area, although population 2 has not been refound since 1992 when it was first discovered. In the Coolcalalaya area, this species grows on yellow sandplain beneath shrubs in open mallee scrub with emergent Actinostrobus sp. Associated species include Allocasuarina campestris, Grevillea candelabroides, Conospermum stoechadis and Thryptomene sp. In the Mullewa area, it grows in light brown sandy loam or brown loam over laterite in tall Acacia shrubland with mallees.