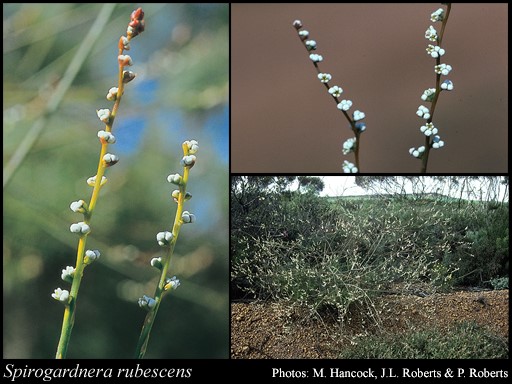 The main identified threats to Spiral Bush are fire, which kills the species and, for roadside populations, disturbance from road/infrastructure maintenance. Land clearing has been the main threat in the past, and unknown populations may still occur on private land.

Spirogardnera rubescens is an erect, open plant to 1.6 m tall, with succulent, light green flowering branches which twist in a spiral shape. There are reddish bracts on these stalks to 0.4 cm long and the flowers are arranged in sessile clusters, each with four flowers and up to 20 clusters along each stalk. The flowers are 0.2 cm long, with five perianth lobes, white on the outside and yellow-green with fine hairs on the inside. There are five stamens opposite the petals. The fruit is stalkless and succulent, surrounded by the persistent perianth segments, which become dark red with age.

Spiral Bush is found in gently undulating country in a number of ecological communities. In the Moora area, it inhabits brown loam and laterite on hill slopes or grey loam over yellow clay loam in tall heath and open mallee scrub with Eucalyptus eudesmioides and E. wandoo. It also grows in clayey sand over laterite in drainage lines and low areas. In the Wannamal area, it grows in brown loam and lateritic gravel or in granitic soil in open low woodland with E. wandoo and Santalum acuminatum.