The Short-petalled Beyeria is endemic to Western Australia where it is known from three specific populations in the Kalbarri–Murchison area, approximately 600km north of Perth. It is thought to be a relatively short-lived disturbance opportunist, appearing after a fire and then declining in number over the next few years.

The Short-petalled Beyeria had not been collected for 120 years and was presumed extinct until the species was re-discovered in 1994 in Kalbarri National Park. Subsequent surveys from 1995 to 2003 failed to locate the species at this site. However, in 2004, two subsequent populations were discovered in a private conservation reserve 55km away from Kalbarri National Park.

The Short-petalled Beyeria has been found growing in yellow, sandy clay within a gully, a limestone ridge above a gully, and in shallow sand over sandstone.

The Short-petalled Beyeria is an erect, open shrub, ranging from 0.25–1.7m in height, with separate male and female flowers. The flowers are green to yellow and the flowering period is from July to August. The fruit is a three-celled oval capsule which contains three seeds and is approximately 6mm long. Little is known about the levels of flower and fruit production of this species; its floral structure suggests that it is insect pollinated.

Threats to the Short-petalled Beyeria are considered to be track and firebreak maintenance and inappropriate fire regimes. As Short-petalled Beyeria occurs on tracks and firebreaks, it is potentially susceptible to accidental damage from maintenance activities such as grading and widening. Inappropriate fire regimes may potentially threaten the species, as seeds of Small-petalled Beyeria probably germinate following fire. Under an inappropriate fire regime, the soil seed bank is likely to be depleted by recurrent fires before regenerating plants have reached maturity and have replenished the soil seed bank. However, occasional fires are almost certainly needed for recruitment of this species. As fire regimes have changed since European settlement of the area, the occurrence of this species has been affected due to the change in fire frequency and intensity. 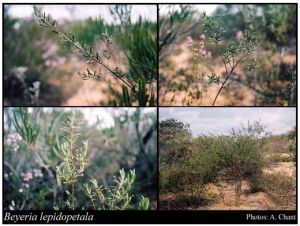