Scale-leaf Poison is known to occur between the townsites of Watheroo and Marchagee in the Moora district of the West Australian wheatbelt. It is known to exist in 14 populations, seven of which are split into two sub-populations giving a total of 21 known locations. Two of these locations are on a railway reserve, one is on conservation estate, seven are located on private property, and 11 are on road verges. In 2007, an estimated 1,200 Scale-leaf Poison plants were known – the largest population had 240 plants. The area of occupancy is approximately 0.6 km² (based on 15 locations), and currently the habitat condition is considered to be ‘poor’ or ‘disturbed’ for 11 locations.

Gastrolobium appressum is a small woody shrub, growing up to 50cm high, with young branches covered with fine white hairs. It has pale-green, leathery leaves which have short stalks and end in a fine, sometimes slightly hooked point. The leaves are hairless, up to 1cm long and 0.3cm wide, and are arranged in whorls of three. They are closely pressed against the stem, and often overlap the adjacent leaf whorls so that the stem is hidden. The typical pea flowers are borne above the leaves in several whorls of three, clustered at the ends of the branchlets. The petals are orange-yellow and reddish-purple, and the fruit is a hairy pod containing two hard seeds. The flowering period is from September to November.

This species occurs on slopes or on crowns of small hills, as well as on sand plains. It grows in quartz gravel, and white or yellow sand, in vegetation associations that include thicket, open low scrub over heath, and open dwarf scrub.

The main identified threats to Scale-leaf Poison include weeds at 17 locations, and road works and road grading at 10 locations. Populations occurring on private property and road verges are also threatened by grazing. The main potential threats to the species include inappropriate fire regimes (including prescribed burning), land clearing, fire break maintenance, mining, and it is presumed to be susceptible to dieback caused by Phytophthora cinnamomi. 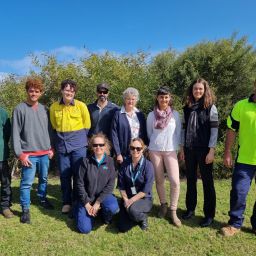