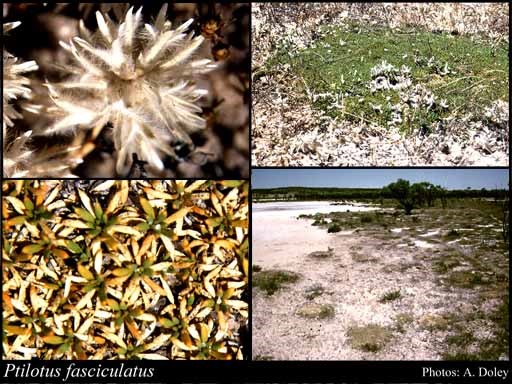 The Ptilotus fasciculatus, also known as Fitzgerald’s Mulla-mulla, is a perennial herb with short leafy branches and upright, simple flowering stems. It is found in open shrubland and grows in white-grey, sandy-loam, clay soils in moist, saline conditions.

The perennial herb is endemic to Western Australia and is located in eleven separate subpopulations in the southern part of the State and has a linear range running parallel to the coast (north-north-west to south-south-east), in areas surrounding Kondinin, Carnamah and Coorow. The most southern tip of the range is 180 km east of Perth.

It has a total population of approximately only 3300 individuals and its main identified threats are increasing salinity, and grazing by rabbits  and kangaroos.

It has hairless leaves that are narrow and usually about 10–14 mm long. The spherical pink flower spikes are usually about 2.5 cm in diameter on white, woolly stems, up to 13 cm tall. The broad, straw-coloured bracts and bracteoles are 3 mm long and have long, soft, shaggy hairs.