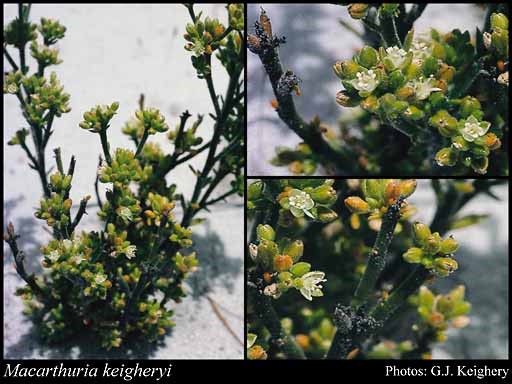 The main threats are clearing, inappropriate fire regimes, road and firebreak maintenance and construction, weeds, grazing, and other impacts of development.

Macarthuria keigheryi is a small erect shrub up to 40 cm tall with hairy, bright yellow to green stems. The leaves are present mainly at the base of the stems and on young growth. They are narrowly obovate to elliptic in shape, 2.7 – 11.5 mm long and 0.7 – 3.5 mm broad. The flowers have five sepals that are hairy on the outside. The outer sepals are green, the inner are partly white and membranous. The five petals are narrow, falling early. There are eight stamens joined at the base. The style is small, divided into three. The seeds are normally round, black and shiny. Macarthuria keigheryi is distinguished from other members of the genus by a dense covering of golden hairs on the stems and leaves.

Macarthuria keigheryi is currently known from six populations over a range of approximately 160 km. However, plants have not been recorded in two of these populations during recent surveys. One isolated population which was recorded as having extant plants in 1996 and then rediscovered in 2006 with over 10,000 plants, occurs west of Dandaragan, while the other five are within a 5 km radius at Welshpool and Kewdale, south-east of Perth.

Macarthuria keigheryi dies back to rootstock during the summer. An increase of plant numbers was observed following firebreak maintenance and Departmental file records show that the largest M. keigheryi populations were recorded following fire, suggesting that the species may be fire/disturbance responsive. The flowers are sweet smelling and attract small insects including native bees, flies and wasps. Fruiting occurs between December and February with seed gathered and dispersed by ants. The species has not been tested for resistance to dieback disease caused by the fungus Phytophthora cinnamomi.