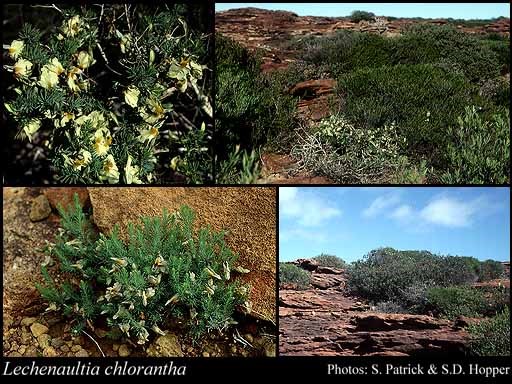 Feral animal disturbance has been recorded in nearly all populations.

Lechenaultia chlorantha, also known as Kalbarri Leschenaultia, is a low, diffuse, many branched shrub, growing to 30 cm tall, sometimes suckering. The stems have rough bark, except on new growth. The leaves, 6.5–13.5 mm long, are soft and fleshy and are crowded on the stems. Solitary flowers are held at the end of branchlets with sepals 7.5–9 mm long. The corolla is 21–25 mm long, pale bluish-green in colour, and hairy inside and the 5 winged lobes are almost equal. The two upper converging lobes enclose the pollen presenter and are more or less recurved. Wings on the joining margin are absent. The other lobes are spreading and reflexed. This species has a woody rootstock from which it is thought to sucker. Flowering occurs from July to September.

Kalbarri Leschenaultia is endemic to Western Australia, where it is known from areas near Kalbarri. Of the six locations where this species is found, three occur in Kalbarri National Park, two on private property and one on unallocated Crown land. The unallocated Crown land location is a proposed conservation estate and has the largest population with approximately 270 plants. The total population size is estimated to be 410 mature plants; however, two populations have not been surveyed since the late 1980s. The extent of occurrence is estimated to be 40.25 km2.