Tecticornia bulbosa, or the large-articled Samphire, is a low sprawling shrub with barrel-shaped segments, or articles, coated with a thick waxy powder.

The articles are hairless and pale blue or pink.

The lateral flowering spikes, which are up to 20 mm long, are stalkless with opposite bracts that are united and have wavy edges. The hermaphroditic flowers are arranged in groups of three; the outer floral whorl is united and has succulent side walls, but is otherwise thin, hard and brittle.

The main identified threats to Large-articled Samphire are habitat degradation due to grazing from sheep and road works and increased salinity. The response of the species to fire, disease and weed invasion is unknown.

The shrub typically grows to 1m tall by 1-3m in diameter, while the spreading branches can grow about 15mm long and 12mm wide. 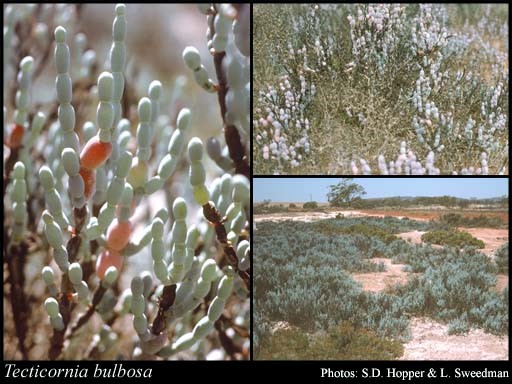 The tip is flattened and divided into two lateral lobes. The fruiting spike is dark brown and persistent. Enclosing the fruitlets are cup-shaped leathery bracts. The fruitlets are partially spiny and eventually become free from one another and from the bracts. The seeds produced by this shrub are smooth and pale brown.

In 1995, only one Large-articled Samphire population was known. This population was on a shire road reserve and private land to the east of Morawa and consisted of more than 1,000 healthy individuals. During surveys conducted in 2008 over the known range of the species, the mature plant population was recorded as 47 000 individual plants.

Note: This species was formerly known as Halosarcia bulbosa.

And let’s give a big thanks to the local mining companies that not only the surveys that expanded the known population of this threatened species by almost 50 times, but also continue to fund ongoing monitoring programs.