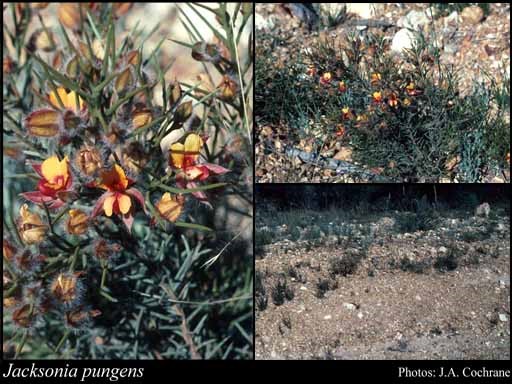 Jacksonia pungens, or Pungent Jacksonia, is listed as Endangered under the Commonwealth Environment Protection and Biodiversity Conservation Act 1999 (EPBC) and as Declared Rare Flora under the Wildlife Conservation Act 1950. Jacksonia pungens was declared as Rare Flora in November 1997 and was ranked as Critically Endangered in November 1998. It currently meets World Conservation Union (IUCN 1994) Red List category ‘CR’ due to the continued habitat degradation and decline in plant numbers.

Jacksonia pungens was first collected in 1979 by C. Chapman in the Marchagee area. The same area was surveyed for the species between 1990 and 1995 without success, however in 1996, two new populations were discovered in the immediate area surrounding the site of the original collection. This survey also included many of the local conservation reserves, but no populations were located in these reserves.

Pungent Jacksonia has conspicuous orange pea flowers with red markings surrounded by large persistent bracteoles, which splay open during flowering and then close over the developing fruit. Growing from 0.3 – 1 m tall and 0.4 – 1 m wide, this domed grey shrub is densely branched, with flowers scattered along pungent tipped branches. The pods are flattened and covered in downy hairs. The species is known to flower from October to November and occasionally in December. When flowering does occur, it occurs quickly and is completed within several weeks. The species is said to fruit prolifically and the seed has a high germination rate. By far the most common field observation is that Jacksonia pungens is a disturbance opportunist, growing in rip lines, graded firebreaks and the disturbed section of road and rail reserves.

It is only known from three populations that occur on yellow to brown sand or gravelly lateritic soil with quartzite over chert. The associated vegetation is characterised by tall shrubland of Allocasuarina campestris and Actinostrobus.

The species faces a number of threats including road, rail and firebreak maintenance activities.

Weed invasion is a threat to all populations. Weeds not only compete with adult plants for light, moisture and nutrients, but they also reduce the chance of regeneration from soil stored seed. Weeds also increase fuel loads and exacerbate the fire risk. Inappropriate fire regimes would impact the viability of populations, however occasional fire is needed for the reproduction of the species. Grazing by sheep is a possible threat to one of the populations. Wildflower picking is a minor threat to another of the populations as plants are located adjacent to a main road and the taxon is conspicuous when flowering. Populations of Jacksonia pungens are also close enough to crops to be affected by herbicide and fertiliser applications from adjacent farmland. 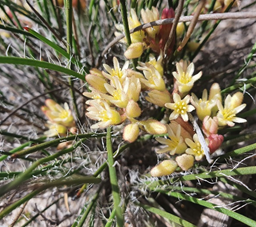