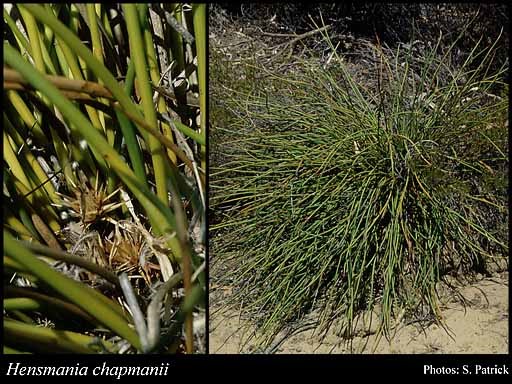 The main potential threats to Chapman’s Hensmania include firebreak maintenance; roadwork; weeds; inappropriate fire regimes; salinity; and ageing populations. Populations near road verges may be directly affected through road widening, or indirectly through pollution and runoff. Too frequent fire could be detrimental to this species. The species’ susceptibility to dieback caused by Phytophthora cinnamomi is not known.

Hensmania chapmanii, Family Anthericaceae / Phormiaceae, is a tufted perennial plant with underground rhizomes. The leaves (circular in cross-section) are 3 mm or more in diameter, have brown or transparent sheathing bases and are up to 38 cm long. The umbrella-like inflorescence, up to 50 mm in length and 8 mm in width, is held on a stalk that is shorter than the leaves. Bracts are pale brown and sharply pointed and a cream floral whorl forms a tube in the lower third and divides into six equal segments at the upper part. Fruit are produced in February and March, and flowering occurs from December to January.

Chapman’s Hensmania is endemic to Western Australia and is known from five populations located south-west of Three Springs and Carnamah within the Moora District. Of these populations, two occur on a road verge, while the remaining populations occur on private land. The number of mature, flowering plants which constitute these populations is estimated to be 3,800. The extent of occurrence is approximately 190 km2.