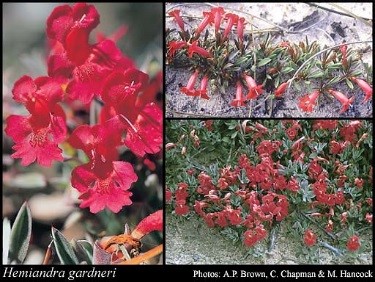 Hemiandra gardneri was declared as Rare Flora in 1987 due to the severe fragmentation of populations, and the continuing decline in the area, extent and quality of habitat and number of mature individuals and populations. The main threats to the species are road, rail, fence and firebreak maintenance, weeds, rabbits, edge effects (due to the linear nature of the populations) and poor recruitment.

Hemiandra gardneri is a prostrate perennial shrub that forms a mat up to 15 cm high and 2 m in diameter. Its primary stems are usually up to 40 cm long. The leaves are up to 20 cm long and 5 mm wide, with a sharp point and three raised veins on the lower surface. Both leaves and calyx are covered with short hairs, giving the plant a grey appearance. The dark red to pink flowers are clustered towards the end of the stems. This species was first thought to be a variety of Hemiandra pungens (Snakebush) but is distinguished by the velvety hairs on the leaves and calyx. Flowering period is between August and October.

Red Snakebush is currently known from seven populations, five of these are clustered over a range of approximately 15 km between Watheroo and Gunyidi. A sixth population occurs approximately 40 km to the North West and another 90 km to the West. It is found in deep yellow to yellow-white sand on sandplains and hills. It is most abundant in open areas under low woodland of Banksia prionotes, Banksia attenuata, Xylomelum angustifolium, Actinostrobus pyramidalis, Jacksonia eremodendron, Conospermum stoechadis and Verticordia species, occasionally with low sedges and grasses.

The first collected specimen was taken from Watheroo in 1926, and the location of herbarium specimens suggests that this species was far more widespread before much of the land in its range was cleared for agriculture. Historically, collections have been made from Wubin (1959), Marchagee (1966), and near Jurien Bay (1978), but these populations have not been relocated recently.