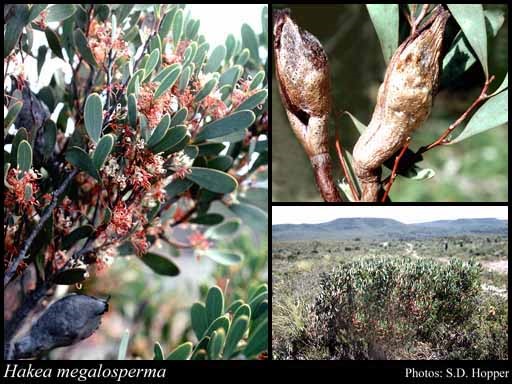 James Drummond first collected this species in about 1850 from the Lesueur area. It was described by Meissner in 1855. The specific name refers to the large fruits. Hakea megalosperma is an erect to spreading, multi-stemmed shrub to 1.3 m high and 2 m across. The leaves are thick, flat, obovate-oblong in shape, with blunt tips and tapering to the short stalks, 4-10 cm long, and up to 4 cm broad. They are a distinctive pale green in colour, with faint veins.

The flowering period is from April – June. The flowers are whitish-pink, darkening to deep red with age, hairless and grouped in small, axillary clusters of 5-10 flowers, which have a sweet perfume. Each flower is approximately 0.5 cm long, on a long stalk. The style has a disc-shaped pollen presenter. The fruit are large, 5-7 cm long and 3-4 cm broad, each valve with an apical beak. The seed is surrounded by a broad, papery wing. This species may be confused with H. incrassata, which has more pointed leaves and smaller, more rounded fruits.

Hakea megalosperma occurs in the Lesueur area, and eastwards for approximately 35 km with an occurrence approximately 65 km further south to the west of Dandaragan. There are five known populations. Three, including the two largest, contain a total of about 200 plants and occur in an area proposed as a Nature Reserve, but which is also subject to a mining claim. The fourth population consists of a single plant occurring in a C class Nature Reserve. The fifth population consists of around 20-30 plants and is on uncleared farming land.