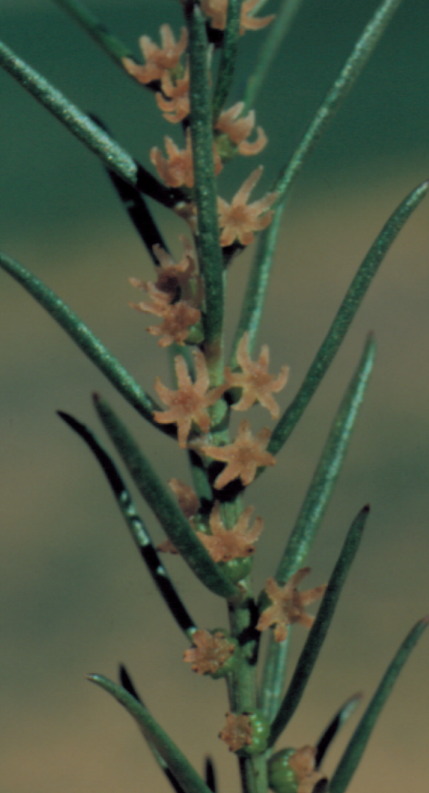 C.A.Gardner made the first collection of Gyrostemon reticulatus (Net-veined gyrostemon) from near Canna in 1933 and five years later W. Blackall collected it near Wubin and Kalannie. It was then not seen again for 52 years until found by Brother van Veen in 1990. During surveys of this population in August 2001 over 500 plants were seen.

Net-veined Gyrostemon is an erect dioecious (male and female flowers occur on separate plants) shrub to one metre tall with crowded linear leaves 11-35mm long. These are circular in cross-section and sometimes have hooked tips. Male flowers have 12 to 14 stamens that end in sharp points, and are arranged in a whorl. The female flowers have 5-7 carpels with narrow, flattened stigmas about 1mm long. The stalked, solitary fruit is spherical, and the 3mm long.

The species is distinguished from the related Gyrostemon australasicus by its reticulate carpels with narrow keels, and by the generally larger number of stamens (usually nine to 12 or 14 in G. australasicus).

Net-veined gyrostemon is currently known from a narrow geographic range of just two kilometres in an area south east of Mullewa where it grows on yellow-brown sandy slopes in a dense shrubland of Melaleuca, Acacia acuminata and Allocasuarina campestris.

The main threats are its limited range, grazing, inappropriate fire regimes and accidental damage during firebreak maintenance and herbicide spraying.

If you have seen this plant it would be most helpful to notify the Department of Parks and Wildlife Geraldton of the location and this might be information which helps bring it back from the brink of extinction.