Pythara Grevillea is endemic to Western Australia and is restricted to Pithara, southwest of Dalwallinu. It is known from only one population – which occurs as three discrete groups over less than 1 kilometre of road verge. Less than 300 individual plants are known of. 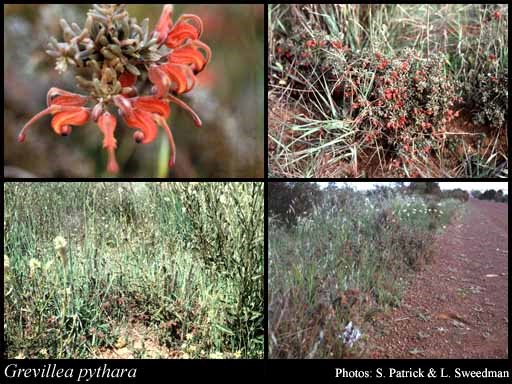 Grevillea pythara is a low, upright shrub that grows from 6–30cm high, and produces plants from root suckers. Flowers are 10-15mm long (excluding the style), and red with a blue to black border on the petal margins around the limb. The leaves are 7–16mm long and 1.5–4mm wide. They are narrow, greyish-green, and covered with long, soft, fine hairs. They also have downward-curving margins and a pointed tip. This species flowers mainly between July and December, but also sporadically at other times of the year.

Pythara Grevillea grows in gravelly and sandy loam on a weedy, disturbed road reserve along with remnant native species including Actinostrobus sp., Conospermum stoechadis, Dampiera spp., Keraudrenia spp., and Gastrolobium spp. The distribution of this species is not known to overlap with any EPBC Act-listed threatened ecological communities.

The main identified threats to Pythara Grevillea are small population size and the significant weed invasion of its current habitat. Other threats include grazing and trampling by passing stock, competition from native species such as Dampiera lavandulace, and road maintenance activities. The main potential threats to the Pythara Grevillea include salinization, inappropriate fire regimes, chemical drift from nearby farms, and grazing by feral rabbits.