#ThreatenedSpecies of the Week: Grevillea humifusa 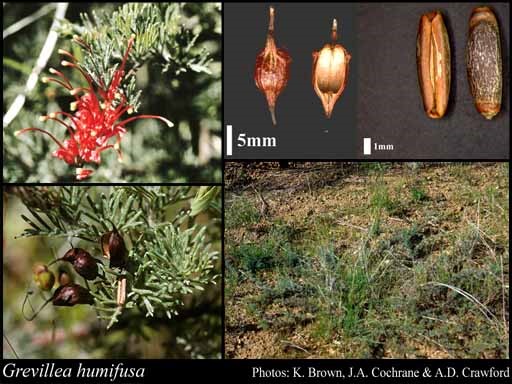 The main factors that result in the species being eligible for listing in the Endangered category are its continuing decline due to grazing by rabbits and the low number of mature individuals within the one known population.

The spreading grevillea is a prostrate shrub with a lignotuber, trailing stems to 3 m long and angular branchlets with long soft hairs. The grey-green leaves are 1.5–2 cm long and are ascending to spreading. The inflorescences are 2 cm long and occur at the end of the branches. The flowers are pink to red, and the style is pink to red with a yellow tip. The grooved, oblong fruit is 12–15 mm long and 3–4 mm wide. Grevillea delta and G. preissii are closely related to the spreading grevillea but neither of these species has a trailing habit. Grevillea delta also differs in its less crowded flowers and its hairier flower tube and flower stalk.

The spreading grevillea is endemic to the Eneabba area, where in 2002, it was known from a single population of almost 1500 plants. A major portion of this population (572 mature individuals) was located on private property, in a pasture paddock. This area was fenced to exclude stock in 1997. It was burnt in 1995 but plants regenerated well. The remainder of the population (920 mature individuals) occurred on adjacent Shire road reserves. The population as a whole has been disturbed but plants were healthy in 2002.