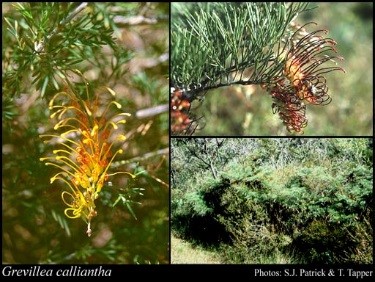 Grevillea calliantha was discovered in 1981 by Nick Foote who provided material to Zanthorrea Nursery. The nursery introduced the species to the Grevillea Study Group, which in turn notified Parks and Wildlife in 1988. The specimen type that was collected near Cataby by B.J. Conn in 1989, is lodged in the New South Wales Herbarium. Subsequent searching by Parks and Wildlife resulted in the discovery of five additional populations. Grevillea calliantha was named by Makinson and Olde in 1991, its name derived from the Greek callos meaning ‘beauty’ and anthos meaning ‘a flower’, referring to the spectacular and prolific floral display.

Grevillea calliantha is endemic to the Dandaragan area of Western Australia. The species grows in sandy or sandy-clay soil in open low woodland of Eucalyptus todtiana and Corymbia calophylla, on lower to mid-level slopes to low hills. It is known from only 6 populations within a range of 8 km. It is cultivated throughout Australia through the commercial nursery industry. The species is threatened by habitat loss, invasive weeds, herbicide overspray, frequent fire, grazing animals and Phytophthora dieback. In 1998 and 2010, translocations were carried out in an attempt to increase the number of extant plants. However, the survival rate has been low mainly due to heavy grazing and drought.

Grevillea calliantha has spreading branches that are ridged and covered with felty hairs. The leaves are rigid, greyish-yellow, green, up to 7.5 cm long and have up to seven stiff, linear lobes. The flower heads are mainly on the edges and lower sides of the branches. Each head has 15 to 30 pouched flowers, about 8 mm long that are hairy and greenish-yellow on the outside, ageing to an apricot-orange colour. The maroon-blackish style is 30 to 40 mm long. Fruits are up to 18 mm long and 9 mm wide, and are densely hairy with a persistent style. G. calliantha is closely related to G. hookeriana but has longer pistils and decurved inflorescences. The flowering period is from August to November.

Foote’s grevillea is one of 30 plants that the Australian Government has prioritised resource allocation to support the species recovery effort. Australia’s Threatened Species Strategy includes targets (i) to improve trajectories of 30 threatened plants by 2020, and (ii) to insure all known threatened plants against extinction by 2020.