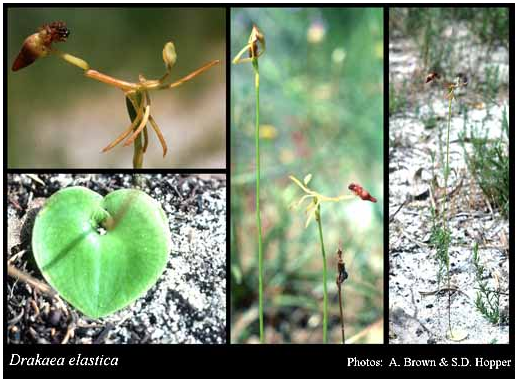 The Glossy-leaved Hammer Orchid is a small orchid with a single distinctively glossy, bright green, prostrate, round to heart- shaped leaf, 1 to 2cm in diameter. The leaf emerges in May, and starts to wither by the time the orchid flowers in September. The single flower, on a slender flowering stem to 30cm high, is 3 to 4cm long with a hinged hammer-like lip (labellum). The two other petals and all three sepals are small and slender. Flowers are first seen in late September, extending to October and rarely in early November. However, it is important to note that each plant may not flower every year. The plant dies back to a dormant underground tuber over summer. The best time to look for the plant is in July and August – when the glossy-green leaves are relatively conspicuous.

All Drakaea orchid species emit pheromones that attract male Thynnid wasps as pollinators, with each orchid species pollinated by a different species of Thynnid wasp. The labellum of each hammer orchid roughly resembles the flightless female wasp of the pollinating wasp species. When the male tries to fly off with the supposed female mate, the hinged labellum causes the wasp to knock against the column of the flower, resulting in either the deposit or removal of pollen. Collections have been made of the Thynnid wasp responsible for pollinating Drakaea elastica, and it is believed to be an undescribed species. These wasps are known to require an abundant source of nectar on which to feed, and the presence of a particular scarab beetle that they parasitise to complete their life cycle. The size of vegetated area required to support a viable population of this pollinating wasp is unknown, but this complex ecological requirement must be taken into consideration with regard to applications to clear habitat of Drakaea elastica.

Drakaea seed is very fine and is wind-dispersed, often for many kilometres. Drakaea elastica relies on an association with a mycorrhizal fungus to germinate its seed and to supply nutrients to the plant throughout its life cycle. If the fungus disappears from the habitat, the orchid cannot survive.

Information Source: Government of Australia, Department of Environment and Energy; and Department of Biodiversity, Conservation and Attractions, and Florabase.