#ThreatenedSpecies of the Week: Gibson Wattle

The main threats to the Gibson Wattle are grazing from feral animal and domestic stock; drought conditions can exacerbate threatening processes.

The Gibson Wattle is a low shrub that grows 0.2–1 m tall and to 3 m wide. This species has a semi-prostrate (spreading) habit and a dense canopy with intricate and dense branching. 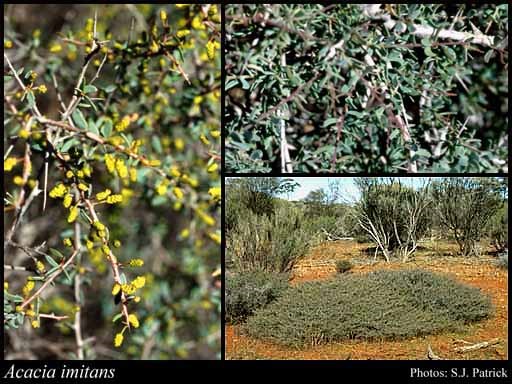 Branches are grey, glabrous and smooth, dividing into numerous, short, straight, rigid divaricate and spinescent branchlets, often devoid of phyllodes. Phyllodes are asymmetric, small and have a sharp, upturned point.

Inflorescences are simple on a 3–4 mm long peduncle, flowering heads are yellow, obloid to shortly cylindrical, 6–8 mm long and 4–5 mm in diameter. Flowering occurs from August to September.

The Gibson Wattle is endemic to Western Australia and is known from six subpopulations in the Mount Singleton area approximately 300 km north-east of Perth. Four subpopulations are known to occur at Ningham Station and two at Mount Gibson Station.

The extent of occurrence is estimated to be approximately 20 km².

The total number of individuals for the Gibson Wattle is estimated to be 550 mature plants across six recorded subpopulations. The greatest distance between these subpopulations is approximately 15 km. All subpopulations are considered necessary for the recovery and long-term survival of this species.

The Gibson Wattle grows on slopes in rocky red loam derived from dolerite, in tall shrubland. Some plants have been observed to grow in mixtures of red loam and dolerite.

The Gibson Wattle flowers between August and September. The biology and physiology of this species is relatively unknown, and pollinating mechanisms, vegetative regeneration and any special requirements for germination are not known. This species has shown regrowth following wildfire and may germinate following fire.