Gastrolobium hamulosum, is a small, erect, and straggly shrub that can grow to 45 cm tall. Short white hairs cover its various slender branchlets. Leaves are blue-green in colour and a hooked point to the blunt tip of the wide oval leaves is characteristic to this species. 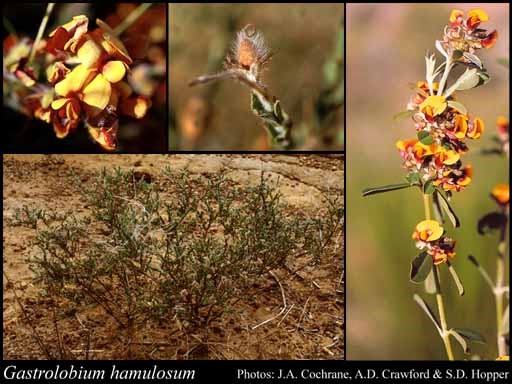 Leaves are arranged in whorls of 3 up the stems. Golden yellow pea flowers, streaked with red, are arranged in short clusters at the ends of the branches. Hook-point Poison generally flowers between August and October.

Hook-point Poison is endemic to Western Australia, where it is known from six populations totalling approximately 160 plants within the Wongan Hills, Victoria Plains, and Moora areas Plants have not been recorded in two populations for a number of years but soil-stored seed may be present.

No populations of this species occur on conservation estate. Locations include road reserves, rail reserves, and agricultural land. The extent of occurrence for this species is approximately 1800 km2 with a much smaller area of occupancy. Surveys of the populations suggest that the species is in decline.

Hook-point Poison grows on pale yellow clay loam with some sand and gravel on clay flats. It also grows in white and grey sand or sandy clay. It sometimes occurs in disturbed ground with other colonising shrubs, such as in low heath with Tamma (Allocasuarina campestris), Melaleuca spp., Eucalyptus spp., and tall sedge. This species has also been recorded from quartzite ridges.

Initial tests indicate this species is highly susceptible to dieback caused by Phytophthora cinnamomi; however, no outbreaks have been recorded in the wild. This species is an obligate seeder and too frequent fire will result in the depletion of the soil-stored seed bank. Occasional fires are required for regeneration of this species.