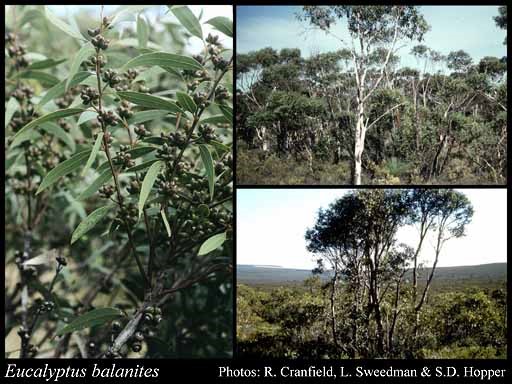 Eucalyptus sp. (E. Nambung) was originally discovered by M.I.H. Brooker in Badgingarra National Park in February 1985. There was a nomenclature change to Eucalyptus balanites in 1992 when the species was formally described. It is still unclear as to whether this species is a hybrid between salmon white gum (E. lanepoolei) and limestone marlock (E. decipiens) as has been suggested. Although some work has been carried out to test this hypothesis, no conclusive results were obtained.

Eucalyptus balanites is an erect, robust tree mallee, 5-8 metres tall and up to 15 metres wide. It is a sprawling tree with rough flaky grey bark up to the branchlets. Seedling leaves are opposite for 6-10 pairs, petiolate, oblong to elliptical, to 4.5 x 2.5 cm and dull green. Juvenile leaves are alternating, petiolate, elliptical, to 6.3 x 3.5 cm and dull green. Adult leaves are alternating, petiolate, lanceolate to 10 x 2 cm, green, dull or slightly glossy; with very numerous side veins. Inflorescences are unbranched, 11-flowered, and 1-2 cm long. Stamens are inflexed, all fertile, cream; and anthers are versatile. The style is twisted near the base. The fruit is very shortly pedicellate and hemispherical, usually with four slightly exserted valves. The seed is dark grey with longitudinal grooves. Flowers can be seen from October to February.

Eucalyptus decipiens is closely related to E. balanites. E. balanites differs in its loose, rough bark, the elliptical juvenile leaves, which are rarely emarginate, the acorn-like buds with the usually rounded opercula, the globoid anthers, and the usually cupular fruit. E. decipiens has heart-shaped juvenile leaves, spindle-shaped buds with a pointed, conical or beaked cap and rough bark over part or all of the trunk.

Eucalyptus balanites is known from two disjunct populations separated by about 210 kilometres. Population 1 in Badgingarra National Park contains 25 clumps or plants. Population 2 occurs in bushland in the City of Armadale and consists of a single plant.