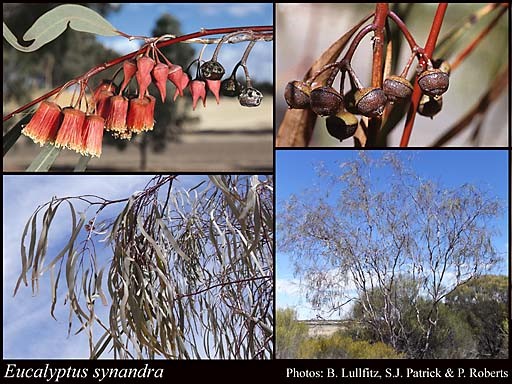 Eucalyptus synandra is a straggly, multistemmed tree to 10 m high. The bark is smooth, powdery white and shreds in ribbons over pink and brown bark. Juvenile leaves (up to 9 cm long and 1.5 cm wide) are narrow, dull and grey-green in colour. Branches are often pendulous, with a thin, narrow crown and pendulous leaves (up to 20 cm long and 16 mm wide). Inflorescences are simple, held in the leaf axils and have up to seven flowers. Stalked buds have hemispherical floral tubes, with a conical to beaked cap. The lower half of the stamens unite to form a tube. The creamy flowers turn pink as they age. The stalked, hemispherical fruits have a thick rim, a steeply ascending disc and up to five protruding valves that are 6–14 mm long. Flowering occurs from December to March.

Eucalyptus synandra is endemic to WA and is known from 27 populations from the northern Wheatbelt, over a range of 300 km, from north of Morowa to the Koora area. The majority of these populations occur on road verges, with the other populations located on private land, conservation estate, pastoral leases, an airport and a timber reserve. The number of mature plants is estimated to be 1,200.