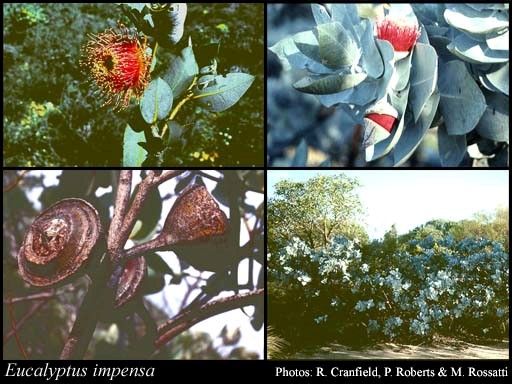 The Eneabba mallee is described as a straggly mallee growing to 1.5m tall with smooth, grey/pale copper bark. The leaves are large and stiff and usually in opposite pairs.

Flowering period is June to July, and the pink flowers are held in the leaf axils. The bud has a slightly ribbed hemispherical floral tube and a beaked cap. The fruits are large, up to 2.5cm long and 6cm across with a conspicuous raised disc and 5 protruding valves. The large fruits are similar to the more well-known Eucalyptus Macrocarpa (Mottlecah), however the Eucalyptus impensa plants are smaller and the leaves have short stems.

The Eneabba mallee is found in very open shrub mallee over low heath, on grey gravelly sand on undulating plains and low breakaway slopes. Following fire the plants re-sprout from a lignotuber.

The Eneabba mallee is known from five populations within nature reserves, one on private property, with two further locations of unidentified tenure found in 2005 and 2008. The last counts identified a total number of 114 mature plants.

There are a number of threats to the survival of individual plants including insect damage (particularly when under stress from drought or fire), inappropriate fire regimes/intervals, firebreak maintenance and disease. The species as a whole is threatened by the very low number of mature individuals, its restricted extent of occurrence and its poor recruitment of new individuals.