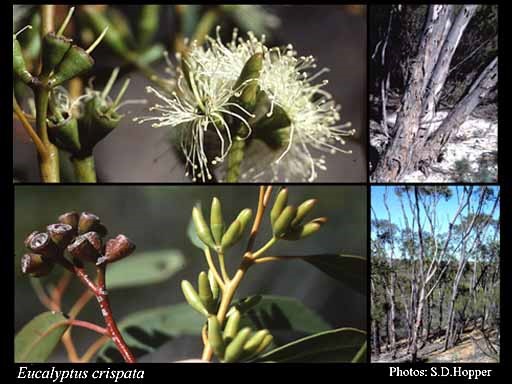 The main threats to Eucalyptus crispata are fire, dieback, grazing, and land clearing. Two populations on private property are at risk from grazing and land clearing and one population is threatened by grazing. The susceptibility of this species to dieback caused by Phytophthora cinnamomi is unknown.

Eucalyptus crispata is an erect or spreading mallee, up to 5 m tall, with smooth grey bark on its upper trunk, and peeling flakes at the base. The pith on the branchlets is glandular. Juvenile leaves are dull and bluish while the adult leaves are green and glossy, 9 cm long and 1.5 cm wide. Adult leaves are narrow to sickle-shaped, with a dense network of veins and numerous oil glands. Inflorescences of up to 13 flowers are on stalks of up to 1.6 cm long. Buds are 1 cm long and 4 mm wide and have a cylindrical to conical cap. On mature buds the cap is the same width as the floral tube at the join. Conical to cup-shaped fruits, on a stalk, have a thin rim, a descending disc and three or four valves below the rim. Seeds are pale greyish-brown.

Eucalyptus crispata is endemic to Western Australia, where it is known from 10 populations in the Yandanooka to Eneabba area and extends down past Boothendarra in the Moora district. In total only 85 Yandanooka Mallee plants are known in the wild, with population sizes ranging up to 20. One population is known to have increased in size from two to five plants between 1988 and 1992, while two other populations are known to have decreased in numbers. One of these has declined in plant numbers from 20 to 15 between 1989 and 2000. The other population that has been seen to decline has dropped in size from two to zero between 1989 and 1992. Five populations occur on land which is privately owned, three on conservation estate, one on a road verge, and one on unallocated Crown land. Most populations are considered to be in a healthy condition.