#ThreatenedSpecies of the Week: Eremophila rostrata 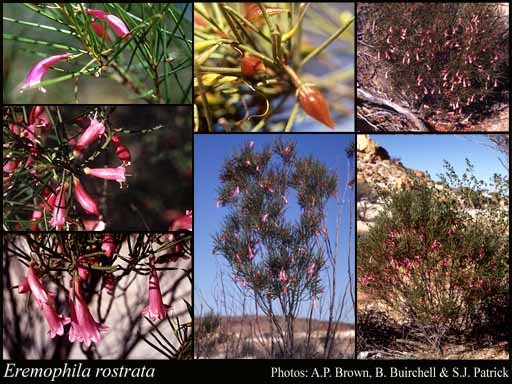 The Beaked Eremophila has been split into two subspecies which represent the two main subpopulation areas: Eremophila rostrata subsp. rostrata found in the Cue area and Eremophila rostrata subsp. trifida in the Perenjoi area. The Beaked Eremophila is an erect, rounded shrub that grows 1.5–3 m tall. The leaves are glabrous, dark green and glossy, and are 1 mm in diameter. The flowers are pendulous and have small calyx lobes. The corolla is scarlet, light pink inside, without spots, and bulbous at the base. The fruits are strongly compressed laterally, convex and keeled above, and beak-like. Both fruit margins are winged. Flowering is September–October for the Perenjori population and June – July for the Cue plants.

Although extensive clearing has occurred, there are areas of suitable habitat (where the species is absent) between the two known subpopulation areas, however it is unlikely that the taxon’s extent of occurrence has changed much. It is unlikely that the area of occupancy will decline in the future as the subpopulations are not in decline and appropriate action has already been taken to address threats.

The Beaked Eremophila occurs in two geographically separate areas with quite different habitats. Near Cue, it grows on stony, buff-coloured saline clays at the base of quartzite hills in an open shrubland (to 2.5 m) of Acacia spp. and Eremophila spp. over open, low shrubs of Ptilotus polakii. Near Perenjori, it grows in red-brown clayey loam in open mallee woodland (to 6 m) of mallee Eucalyptus spp., Spinifex Wattle (Acacia coolgardiensis), Broom Honey-myrtle (Melaleuca uncinata) and Tall Mulla Mulla (Ptilotus exaltatus).

The key threats are from grazing, land clearing and mining. Climate change is of particular threat to rare species that occur in small fragmented subpopulations: these species may not be able to colonise new areas as climate conditions change.