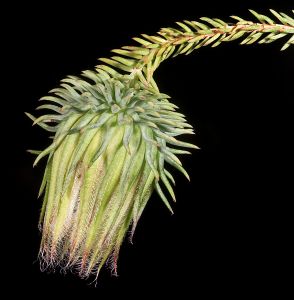 Muchea Bell is an erect or spreading shrub that grows to 0.7m high and often uses other shrubs for support. Young branches are slender, green-brown with prominent leaf bases, becoming grey and woody. This species has green flowers and the flowering period is from October to November. Muchea Bell is named after the distinctive foetid smell of the flowers.

Muchea Bell is endemic to Western Australia. It has been recorded at three locations near the town of Muchea, approximately 70 km north of Perth. The extent of occurrence of Muchea Bell is estimated to be 1.2 km². The distance between the most northern and southern populations is approximately 4 km². A population north of Muchea, recorded in 1960, has since been cleared indicating a past decline in area of occupancy of this species. There are no data indicating what proportion of the species was cleared.

The species’ distribution is very restricted and severely fragmented, as the known populations are small and exist within patches of remnant vegetation surrounded by cleared land.

The estimated total number of mature individuals is approximately 1300. The species is known from three populations: one occurs within a nature reserve; one within a water reserve; and one is spread over two privately owned properties.

It is likely that there has been a decline in the species’ numbers in more recent times, due to grazing by rabbits, weed invasion, changes in hydrology, inappropriate fire regimes, further vegetation clearance and dieback caused by Phytophthora cinnamomi, which may continue in the future.