Banksia fuscobractea, more commonly known as Dark-bract Banksia, is listed as ‘Critically Endangered’ under the Commonwealth Environment Protection and Biodiversity Conservation Act 1999 (EPBC Act) as it has a very low population size that is likely to continue to decline, and a very restricted geographic distribution which is precarious for the survival of the species. 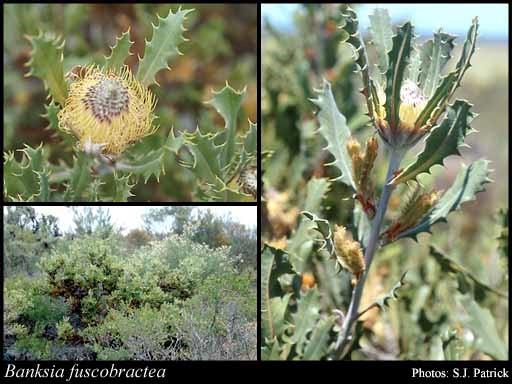 The main threats to the species include road maintenance works, fence or firebreak maintenance, gravel extraction, weed invasion and grazing.

Past threats include the clearing of land for agriculture which has reduced the amount of suitable habitat for the species.

Banksia fuscobractea is an erect, prickly, non-lignotuberous shrub growing to one metre high with wedge-shaped, pungently serrate (prickly) leaves four to seven centimetres long, each with four to nine teeth on each side.

The flower head is four to five centimetres in diameter with pale yellow and mauve flowers. There are between 180 and 190 flowers on each head, which appear between July and August. The stems are covered with a thick mat of hairs.

The Dark-bract Banksia is endemic to Western Australia, and is known from two roadside populations southeast of Gillingarra, approximately 125 km northeast of Perth.

The estimated extent of occurrence and area of occupancy of the species are less than 1 km2. The population size of the species in 2008 was approximately 55 mature plants.