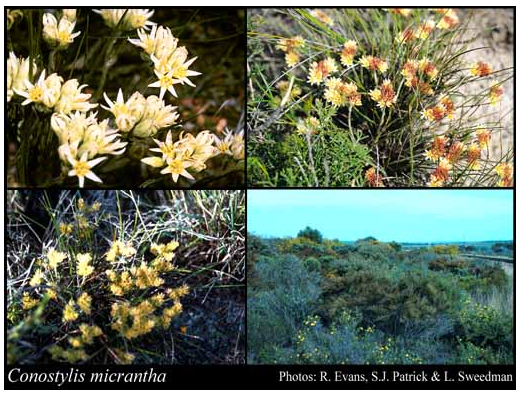 There are a number of impacts which may threaten Small-flowered conostylis, including wide scale land clearing, grazing by rabbits, fire and weed invasion.

Small flowered conostylis is a small, tufted perennial herb to 30 cm in diameter with yellow cream flowers that turn a brick red colour with age. The leaves are 13 to 24 cm long and circular in cross-section, with a few spreading, white hairs 3 to 9 mm long on the lower margins. The flowers are held on stems 5 to 13 cm long, with a hairy papery bract 3 to 8 mm long halfway up the stem. The tubular flower is 5 to 7.5 mm long, and divides into six lobes that are cream inside and golden yellow outside

Small flowered conostylis is endemic to Western Australia and occurs in an area north east of Dongara, over a range of approximately 35 km. A total of 310 plants are known from ten populations, which occur on Shire road reserves, rail reserves and nature reserves. It is found on white or grey sand in low heath, and is quite inconspicuous when not in flower. Associated species include Allocasuarina humilis (dwarf sheoak), Hakea trifurcate (two-leaf Hakea), Hibbertia hypericoides (Yellow Buttercups) and Banksia fraseri.

Information Source: Government of Australia, Department of Environment and Energy and Department of Biodiversity, Conservation and Attractions, and Australian Wildlife Conservancy.