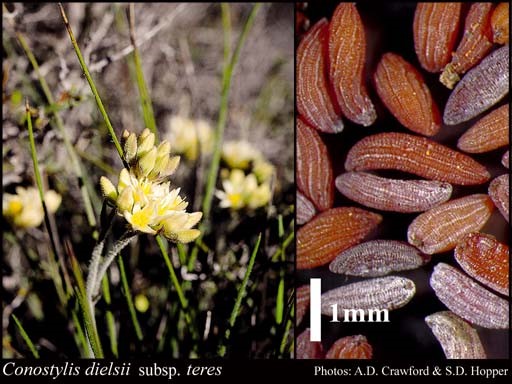 Irwin’s Conostylis is a tufted perennial herb, which grows to about 20 cm tall, and has leaves 13 to 33 cm long and less than 1 mm wide.

The leaf bases are densely hairy, while the upper part of the leaf is less hairy. Irwin’s Conostylis has a dense inflorescence composed of many flowers, held on a 4 -10 cm long stem.

The individual flower stalks are short and each cream flower, 7.5 to 10 millimetres long, is tubular for a third to a half of its length then divides into six lobes. The flowers are covered with short, densely matted hairs.

he petal lobes remain on the fruit and become clawlike, touching at the apex with gaps at the bases. Differs from Conostylis dielsii in the terete, not flat leaves, which are also slightly longer. Also similar to C. teretiuscula, which has silvery, villous hairs on the leaves and numerous ovules on the sides and lower part of the placenta.

Irwin’s Conostylis occurs in an area north-east of Dongara, in Western Australia. In 2001 it was known from from three populations, two on road verges and one small population on a nature reserve. It is found on white, pale yellow or grey sand with lateritic gravel, in heath, open scrub, low open heath and low open woodland, in upland areas, and is quite inconspicuous when not in flower. Associated species include Allocasuarina species, Hibbertia hypericoides, Banksia fraseri, Banksia scabrella, Ecdeiocolea monostachya and Hakea species.

Irwin’s conostylis is thought to regenerate after fire, like other members of the genus, from subterranean regenerative buds emerging from horizontal rhizomes and that soilstored seed germinates following summer fire, as in other species of Conostylis.