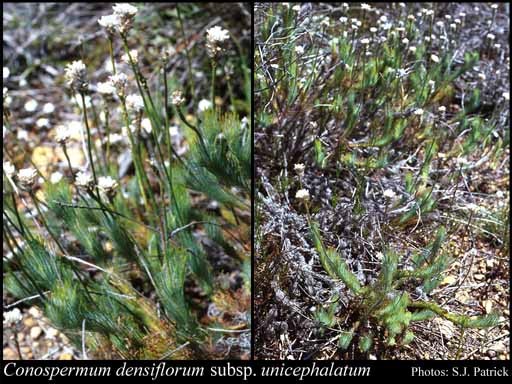 Conospermum densiflorum subsp. unicephalatum is an erect perennial shrub to 0.6 m. The stems and foliage have long, spreading hairs. The leaves are crowded, filiform, ca. 30-40 mm long, with white, spreading hairs. The peduncle is leafless, with a single, almost globular, head-like inflorescence which is 1.5 cm in diameter. The floral bracts are slender and hairy and as long as the flowers. The flowers are tubular and two-lipped, ca. 10-mm long and bluish-white in colour.

Conospermum densiflorum subsp. unicephalatum is restricted to low lying sandy clay soils with surface lateritic gravel, in an area between Gingin and Moora over a range of about 10 km. A previous collection in 1974, which has not been relocated, extends this range to 35km. Generally the plants are healthy, although the surrounding habitat is quite disturbed. Habitat consists of heathland of Acacia acuminata, A. puchella, Adenanthos cygnorum, Allocasuarina campestris, Austrostipa elegantissima, Daviesia preissii, Dryandra serratulioides subsp. serratulioides, Conostylis setigera, Calothamnus pachystachyus, Glischrocaryon aureum, Hibbertia sp., Labichea lanceolata, Melaleuca sp., Ptilotus sp. and Verticordia sp.

Very little is known about the biology and ecology of the genus Conospermum. Most Conospermums are insect pollinated by either native bees or flies which trigger the explosive mechanism in the flower. Although copious amounts of fruit are produced, the amount of viable seed is low.

Conospermum densiflorum subsp. unicephalatum appears to be a disturbance opportunist, with germination apparently stimulated by soil disturbance where gravel has been extracted. Response to fire is unknown, but as it is a seeder, the plants are likely to be killed by fire, and then germinate from soil stored seed.