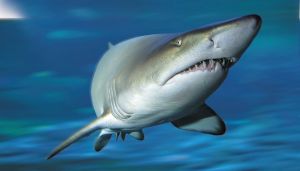 The Grey Nurse Shark is one of four species belonging to the family Odontaspididae. The species has a large, rather stout body and is coloured grey to grey-brown dorsally, with a pale, off-white underbelly. Reddish or brownish spots may occur on the caudal fin and posterior half of the body, particularly in juveniles. The species has a conical snout, long teeth in both jaws, similarly sized first and second dorsal fins and an asymmetrical caudal fin. Grey Nurse Sharks are slow, but strong, swimmers thought to be more active at night.

The Grey Nurse Shark (west coast population) has a broad inshore distribution, primarily in sub-tropical to cool temperate waters. The west coast population is predominantly found in the south-west coastal waters of Western Australia and has been recorded as far north as the North West Shelf.

Grey Nurse Sharks are often observed hovering motionless just above the seabed, in or near deep sandy-bottomed gutters or rocky caves, and in the vicinity of inshore rocky reefs and islands. The species has been recorded at varying depths, but is generally found between 15–40m. Grey Nurse Sharks have also been recorded in the surf zone, around coral reefs, and to depths of around 200m on the continental shelf. They generally occur either alone or in small to medium sized groups, usually of fewer than 20 sharks. Grey Nurse Sharks that are observed alone are thought to be moving between aggregation sites.

The Grey Nurse Shark has a relatively low growth rate and take 4–6 years to mature, with both males and females maturing at about 220cm in length. The growth increment for ages zero to one is 25–30cm, declining by around 5cm every two years to a minimum of 5–10cm per year. The maximum total length is about 318cm for females and 257cm for males. This species grows to a maximum weight of at least 190kg.

The reproductive norm for the Grey Nurse Shark includes oophagy and intra-uterine cannibalism which results in a maximum of two young per litter (one in each uterus). Embryos hatch into the uterus at about 55mm long and develop teeth and consume other embryos in the uterus. The single remaining embryo in each uterus then feeds on any unfertilised eggs as the female continues to ovulate. Gestation takes 9–12 months.

The main threats to the Grey Nurse Shark include commercial fishing, shark finning, recreational fishing, and the aquarium trade.

Information Source: Government of Australia, Department of Environment and Energy and Department of Biodiversity, Conservation and Attractions, and Australian Wildlife Conservancy