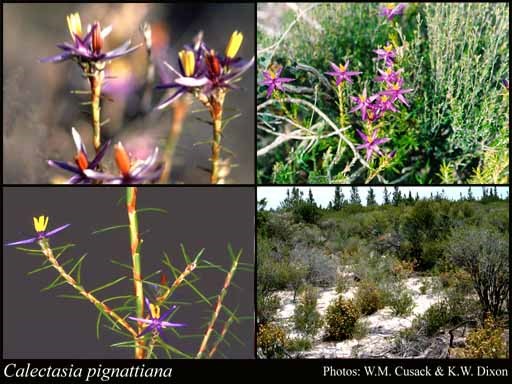 The main identified threats to Stilted Tinsel Lily are inappropriate fire regimes and invasive weeds, which affect the populations on road verges and on unallocated Crown land. Frequent fires, would deplete the soil seed bank.

Calectasia pignattiana is an erect, stilt-rooted perennial herb which forms clumps up to 10 cm in diameter. There are numerous stilt roots up to 3 mm thick and 15 cm long, some projecting from the upper branches. The upper branches (main stems) are woody and up to 60 cm long. The leaves are narrow, linear and slightly prickly, arranged spirally on the main stems and at the ends of short shoots. The flowers have six narrow lobes which form a star shape and six anthers which change from yellow to red as they age.

Calectasia pignattiana is endemic to Western Australia and is known from 11 populations which occur within the south-west Coorow, Narrogin and Katanning areas. Of these populations, three occur on land reserved for conservation of flora and fauna, two on unallocated Crown land, two on road verges, one on a water reserve, one on a camping ground, one on private land, and one on land owned by a Shire. The total number of mature, flowering plants is estimated to be 280 and the extent of occurrence is approximately 14 540 km2.

This species has previously been called Calectasia arnoldii and C. bella.