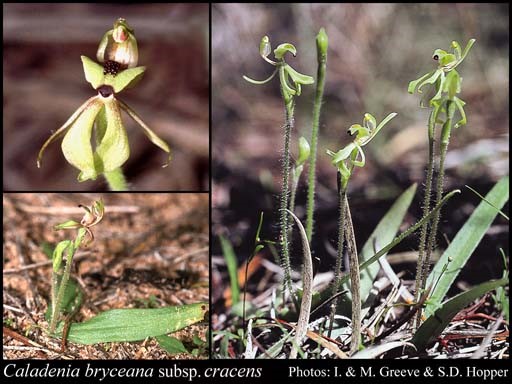 Caladenia bryceana subsp. cracens, also known as Northern Dwarf Spider-orchid, is a tuberous, perennial herb, from 3–8 cm in height, which produces a single, hairy leaf that is broad and may be as long as the flowering stem. The green flower, 14 mm wide, has a red tip on the labellum and dark red calli. The labellum is hinged at the base and the basal calli are fused to form a large clubbed projection with two lobes. Flowering occurs from August to early September.

Northern Dwarf Spider-orchid is endemic to Western Australia and is known from 15 populations between Northampton and Kalbarri. The majority of populations occur on pastoral leases, with others occurring on private land, national parks and reserves. The number of mature plants which constitute these populations is estimated to be 400.