#ThreatenedSpecies of the Week: Banksia Woodlands of the Swan Coastal Plain 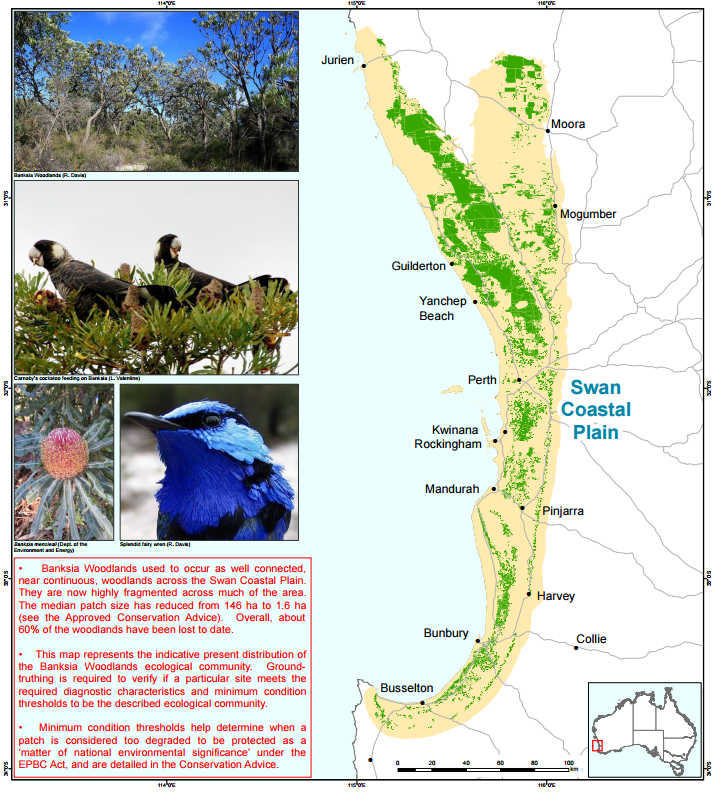 Banksia Woodlands of the Swan Coastal Plain have just been listed as an Endangered threatened ecological community under the Commonwealth Environment Protection and Biodiversity Conservation Act 1999 (EPBC Act).

The ecological community is a woodland associated with the Swan Coastal Plain of southwest Western Australia. A key diagnostic feature is a prominent tree layer of Banksia, with scattered eucalypts and other tree species often present among or emerging above the Banksia canopy. The understorey is a species rich mix of sclerophyllous shrubs, graminoids and forbs. The ecological community is characterised by a high endemism and considerable localised variation in species composition across its range.

The canopy of the Banksia Woodlands is most commonly dominated or co-dominated by Banksia attenuata (candlestick banksia, slender banksia) and/or B. menziesii (firewood banksia). Other Banksia species that dominate in some examples of the ecological community are B. prionotes (acorn banksia) or B.ilicifolia (holly-leaved banksia). Banksia littoralis (swamp banksia) may also be codominant but where it becomes dominant, it typically is not the Banksia Woodlands ecological community as it indicates a different, dampland community. B. burdettii (Burdett’s banksia) is more common on the Dandaragan Plateau where it is often a co-dominant, but being a large shrub where it becomes dominant, it typically forms a tall shrubland and not the Banksia Woodlands ecological community. Other trees of a medium height that may be present, and may be codominant with the Banksia species across a patch, include Eucalyptus todtiana (blackbutt, pricklybark), Nuytsia floribunda (Western Australian Christmas tree), Allocasuarina fraseriana (western sheoak), Callitris arenaria (sandplain cypress), Callitris pyramidalis (swamp cypress) and Xylomelum occidentale (woody pear).

More information can be found at http://www.environment.gov.au/cgi-bin/sprat/public/publicshowcommunity.pl?id=131&status=Endangered

I really like your map presenting the distribution of Banksia Woodland on Swan Coastal Plain. Could I possibly reprint it in my thesis?

You can find this indicate distribution map and a citation reference at http://www.environment.gov.au/cgi-bin/sprat/public/publicshowcommunity.pl?id=131