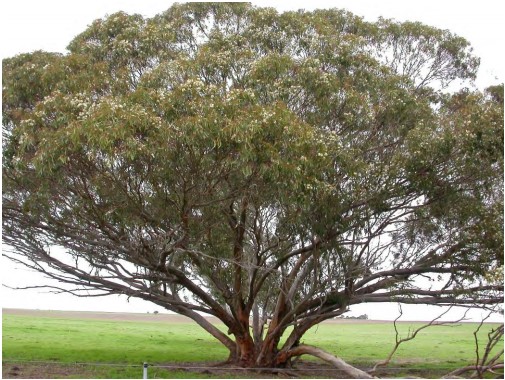 Badingarra Box grows up to 10m tall (although commonly reaching only 4m) and features either rough yellow-brown bark up to 2m from the base or occasionally smooth stems.

The upper branches are always smooth, and may be a grey or coppery colour with a green tinge. Both the pith of young branchlets and the leaves themselves almost completely lack oil glands. The leaves are alternate in their arrangement, glossy green in colour with a dense reticulation and are lanceolate to broadly lanceolate in shape, growing to 10.5 x 3.3cm in size. Inflorescences appear as terminal peduncles consisting of seven flowers with peduncles of up to 1.1cm long. Buds are clavate in shape and range in size from 0.4–0.5cm wide and 0.3-0.4cm long. Stamens are white in colour, with the outer whorl consisting of staminodes (stamens without anthers) giving the flowers a “fluffy” appearance.

The fruits are cup-shaped, pedicellate, with an inward sloping disk and are thin-rimmed. They have four valves (rarely 3 or 5) that are fused and these are shed together as a “lid”. Seeds are dark grey-brown, compressed-ovoid, with very shallow reticulum.

The species is known from a narrow 15km range near Badgingarra in the Shire of Dandaragan. Known populations occur between 24km and 27km west of the north-north-west to south-south-east fault line and between elevations of 210m and 290m above sea level. They seem to be associated with minor drainage lines that flow downhill from upper catchment areas within the Yerramullah geological formation. As most favourable areas of habitat near existing populations of Badingarra Box have been cleared for farmland, it is difficult to extrapolate former natural range of the species. Known populations occur on white sands with some lateritic gravel and in clayey sand on sandy flats lower in the landscape. The most northerly population occurs on dark grey sandy loam on the Hill River floodplain.