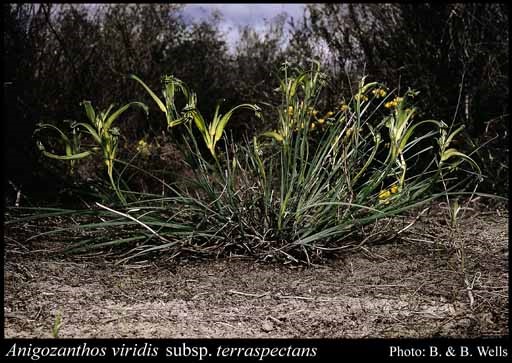 The main threats to Dwarf Green Kangaroo Paw are inappropriate fire regimes and physical disturbance. The occurrence of the species along road verges makes it particularly susceptible to road maintenance activities and fragmentation. The main potential threat to Dwarf Green Kangaroo Paw is dieback caused by Phytophthora cinnamomi. The species’ susceptibility to dieback is currently unknown, but a vigorous outbreak occurred near one population in 1989 and any further outbreaks may affect this population if the species is found to be susceptible.

Anigozanthos viridis subsp. terraspectans  is a small rhizomatous herb with narrow leaves 5–20 cm long and 0.1– 0.2 mm wide, that are almost semi-circular in cross-section. The flowering stem is 10–15 cm tall and is held at a 45 to 80 degree angle, with the curved, paw-like flowers opening away from the stalk. On each flower, green in colour, there are 6 lobes which are turned backwards and are covered in feathery hairs on the outside of the perianth. The floral tube is 4.5–6 cm long and 4–5 mm wide, with the narrowest point above the middle. There are six stamens arranged in two rows, with the outer pair lower than the four inner ones. The seeds are greyish-brown. Flowering occurs from August to December. Dwarf Green Kangaroo Paw can be distinguished from Green Kangaroo Paw (Anigozanthos viridis subsp. viridis) by its shorter flowering stems and smaller, narrower flowers

Dwarf Green Kangaroo Paw is endemic to Western Australia, where it is known from six populations occurring in an area west of Cataby. An estimated total of 1889 mature plants have been recorded, with the largest population, containing approximately 800 plants, occurring along road verges. The extent of occurrence is approximately 100 km2. Insufficient data are available to determine the area of occupancy. This species appears to be in moderately healthy condition, but the populations have not been re-surveyed for a number of years. The distribution of Dwarf Green Kangaroo Paw is limited compared with the Green Kangaroo Paw, which can be found from north of Perth down to the southwest of Western Australia.