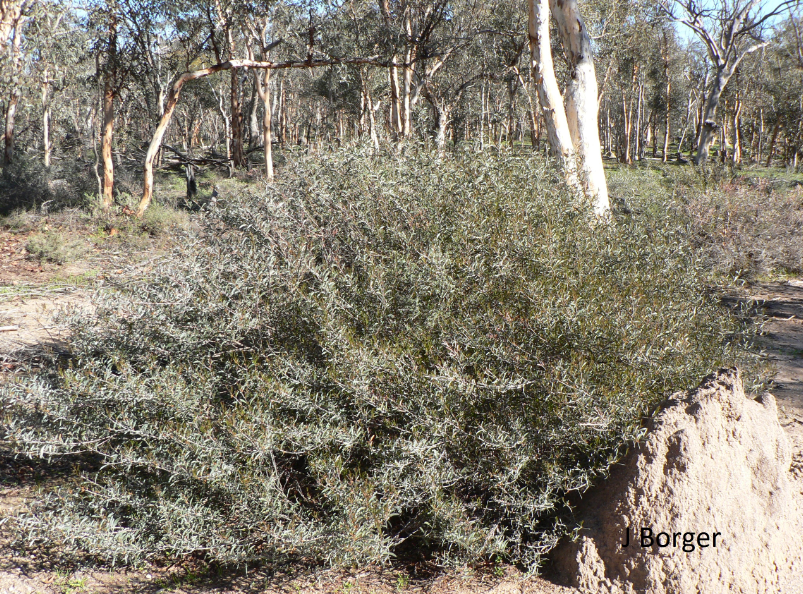 Acacia recurvata is a dense, domed viscid shrub that can grow up to 2.5 m tall. Branchlets are glabrous or sparsely hairy with pale yellow hairs and are very resinous when young.  Phyllodes are dark green to dull grey green and are usually curved, with the upper margin more curved. Phyllodes can be 2.5 – 4 cm long and 4 – 8 mm wide, with an acute end.  They have 5 – 10 resinous nerves and can feel sticky (viscid).  The gland is inconspicuous and basal (at the base of the phyllode).

Inflorescences are simple in axillary pairs or more commonly, 1 or 2 headed rudimentary racemes.  Each inflorescence is 18 – 25 flowered, golden and resinous.  The fruit is a linear pod up to 6 cm long and 2 – 3 mm wide.  Seeds are longitudinal obloid, 3.5 – 4 mm long with a terminal aril. Flowering usually occurs in June – July, but they have been known to flower in May near Three Springs.

Acacia recurvata is endemic to Western Australia, where it is known from five small populations occurring over a range of approximately 60 km in the Coorow – Three Springs area, with one population within a conservation reserve. Acacia recurvata is thought to be an obligate seeder (plants are killed by fire and are dependent on seed for regeneration).