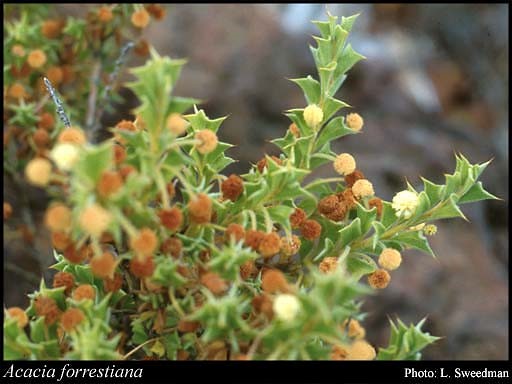 Acacia forrestiana, Family Mimosaceae, is a stiff, spiky, erect shrub and grows from 0.4–1 m high. The leaf-like phyllodes are triangular in shape, 10- 20 mm long, 5-10 mm wide, and are sharply pointed. The species produces yellow globular flower-heads, which are borne from October to December. Plants are killed by fire and regeneration occurs from seed.

The species is closely allied to Acacia huegelii, which has a more southerly distribution and a different phyllode shape.

Forest’s Wattle is endemic to Western Australia, and is known from two localities north of Perth. It occurs near Dandaragan and near Jurien Bay, over a range of about 80 km. Precise localities in the Hill River district are withheld for conservation reasons. Many populations are conserved in Lesueur National Park.