Populations are restricted to areas of remnant vegetation surrounded by land that has been extensively cleared for urban development and agriculture. Threats include inappropriate fire regimes, rail, road and firebreak maintenance, degraded habitat, dieback disease, mining activities and weeds.

Andersonia gracilis is a slender shrub up to 50 cm tall with few, spreading branches. It’s narrow, ovate leaves, up to 5 mm long and 1.5 mm wide at the base, have erect or incurved, keeled tips. Pink to pale mauve flowers are clustered in ovoid or oblong groups of 4 to 14 on terminal heads. The sepals are 7 to 9 mm long, exceeding the petals, style and stamens in length. The lobes of the corolla are densely bearded to the tip and are as long as the tube. 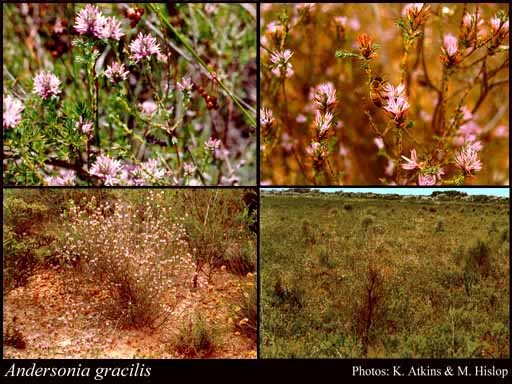 Unfortunately, few of these populations have been verified with voucher specimens. However, many of the newer unconfirmed populations are in the vicinity of confirmed populations and are likely to be that species. Population sizes are also difficult to estimate due to large fluctuations in mature plant numbers, and lack of regular monitoring.

Swiss botanist Augustin de Candolle described Andersonia gracilis in 1839 from specimens collected by James Drummond. The Western Australian Herbarium records show the species was located in the Cannington area in 1902, 1921 and 1963, but no populations are recorded there currently. The species is believed to have been quite abundant on the Swan Coastal Plain, in winter-wet areas surrounding swamps and waterways. However, due to urban development, much of the habitat for the species has been destroyed and ‘filled in’ over time for human use.