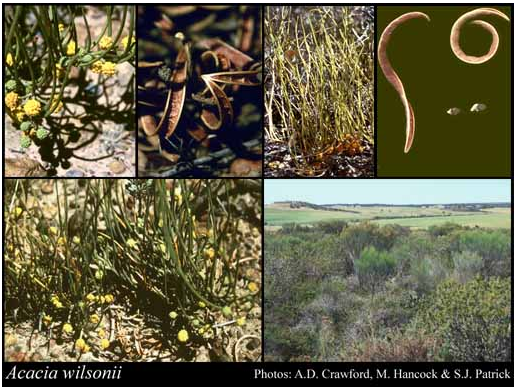 It is also listed as Endangered under the WA Biodiversity Conservation Act 2016.

Wilson’s Wattle was named in honour of Paul G. Wilson from the WA Herbarium – who collected the type specimen. It is a low shrub (up to 30cm tall), with horizontal branches bearing terete erect phyllodes up to 13cm long. The flower heads are globular, golden yellow in colour, with stalks about 1cm long. The flowers have united sepals. The legumes are linear, subterete, up to 5.5cm long, and contain oblong, dull brown seeds.

Little is known about the biology and ecology of Wilson’s Wattle. It is a member of the Mimosaceae family, and is likely to have a similar biology and ecology to other Acacia species. Germination is likely to be triggered by natural disturbance events (physical or fire), hence its affinity for growing in disturbed areas. Acacia seeds often have a hard seed coat, and remain dormant until the seed coat is ruptured by heating or scarifying. This is a method exploited by many Australian species of Acacia to survive the fires that were a regular natural occurrence in many Australian habitats.

Current threats include road, track and firebreak maintenance, grading, chemical spraying, construction of drainage channels and the mowing of roadside vegetation, weed invasion, and inappropriate fire regimes. Frequent fire would likely deplete the soil seed store, and conversely, occasional fires may be required to germinate soil-stored seed. Fire appears to also facilitate weed invasion, and when it occurs, should be followed-up with appropriate weed control. Wilson’s Wattle may also be threatened by dieback (Phytophthora cinnamomi), a pathogen that causes root rot, resulting in susceptible plants dying of drought stress. Although it is unlikely the species is susceptible, associated habitat species are highly susceptible.

Information Source: Government of Australia, Department of Environment and Energy; and WA  Department of Biodiversity, Conservation and Attractions (Florabase). 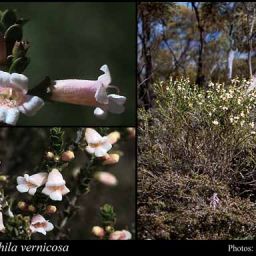