The White Featherflower, or Verticordia albida, is a shrub which grows between 0.3–2.6m tall. It grows in dense spikes and is usually white, cream or pink, with a pink centre. Petals are 4–5mm long with a 1mm long fringe, rounded leaves with smooth margains and flowering generally happens in November to January. 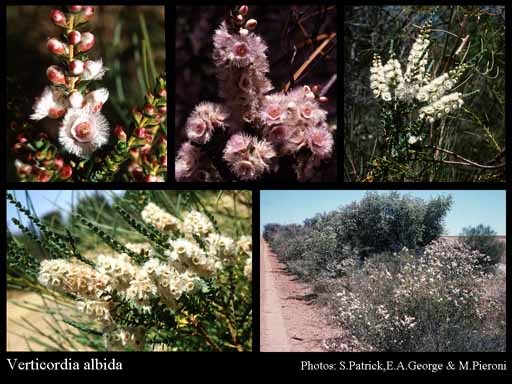 Its main potential threats to White Featherflower include dieback caused by Phytophthora cinnamomi and road widening or maintenance.

This species grows in white-grey to yellow sand over gravel or laterite, in scrub or thicket.

All three known populations occur near roads. Associated species include Banksia prionotes, Callitris sp., Eucalyptus todtiana and Jacksonia sp. The distribution of this species is not known to overlap with any EPBC Act-listed threatened ecological communities.